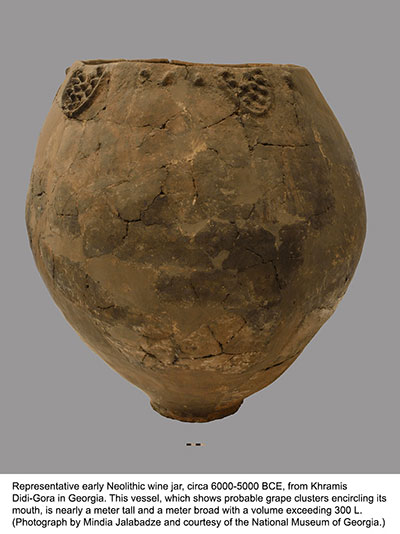 “The beginnings of viticulture and winemaking in the Middle East have been pushed back another 600-1000 years to around 6000 BCE during the early Neolithic period in the country of Georgia in the mountainous region of the South Caucasus,” asserts Dr. Patrick McGovern, Scientific Director of the Biomolecular Archaeology Project for Cuisine, Fermented Beverages, and Health at the Penn Museum in Philadelphia. Dr. McGovern, who has made a career of finding, analyzing, and interpreting evidence of the important role of alcohol in the history of humankind, was lead author of the 1996 Nature journal article that surprised the world with its findings at Hajji Firuz Tepe.

The new findings are reported in the Proceedings of the National Academy of Sciences November 13, 2017. Dr. McGovern, the lead author of the history-changing paper, worked with an international team of scientists from the U.S., Canada, Denmark, France, Italy, Israel, and Georgia to carry out the multidisciplinary research project, using state-of-the-art technology, over the past four years. The project was coordinated and overseen by co-author David Maghradze and funded by the government of Georgia.

Sites, previously excavated in the 1960s using less precise methods, were re-opened at Shulaveris Gora and Gadachrili Gora, in the province of Kvemo (Lower) Kartli, about 50 kilometers south of the modern capital of Tbilisi. Both sites are contemporaneous, close to the Kura River, and belong to the so-called “Shulaveri-Shomutepe Culture” (SSC), a cultural region recognized by archaeologists that extends southeast downriver to Shomutepe and other sites in Azerbaijan and south into the Armenian highlands. (Modern Georgia and neighboring countries do not have the same political boundaries as the SSC culture.) The two sites were established as small villages during the early Neolithic period (6000-5000 BCE). Pottery, ideal for processing, serving and storing fermented beverages, was invented then, together with many other advancements in art, technology, and cuisine.

Evidence for the Claim

Wine residues were recovered and analyzed from the interiors of eight large ceramic jars from the two sites. Using the most exacting chemical technique available--tandem liquid chromatography-mass spectrometry-mass spectrometry or LC-MS-MS—the jars were shown to contain the finger-print compound for grape and wine (tartaric acid) and three associated organic acids (malic, succinic, and citric). Pottery’s ionic and porous properties make it ideal for absorbing and preserving ancient organic compounds over millennia.

The combined archaeological, chemical, botanical, climatic, and radiocarbon data demonstrate that the Eurasian grapevine (Vitis vinifera) was abundant at the Georgian sites and growing under ideal environmental conditions in early Neolithic times, similar to premium vinicultural regions in Italy and southern France today.

The quantity of wine in the Georgian jars--the most common pottery shape at the sites containing upwards of 300 liters each--strongly implies that the grapevine had already been domesticated and was being cloned and transplanted by horticultural techniques, according to Dr. McGovern.

Since the research claims to have identified the earliest grape wine in the Near East, very precise dating was needed. Numerous short-lived botanical samples (e.g., wheat and other seeds), as well as charcoal samples, from carefully excavated contexts in association with the wine jars were radiocarbon-dated by accelerator mass spectrometry. The analyses gave results within a narrowly calibrated range. Bayesian analysis confirmed that the earliest phase was ca. 6000-5800 BCE with later phases extending down to about 5500 BCE. Earlier levels at Shulaveri remain to be excavated.

Additional chemical analyses by Fourier-transform infrared spectrometry (FT-IR) and gas chromatography-mass spectrometry (GC-MS) of the pottery were less informative, but gave results consistent with those by LC-MS-MS. A notable finding was the absence of a tree resin, which was widely used in the ancient Near East to prevent wine going to vinegar. Moreover, no other ingredients (e.g., medicinal herbs, honey, and cereals) were mixed with the wine, which was to become a common later practice.

Climatic studies were based on pollen profiles from Lake Van in Turkey, the Nariani wetland in western Georgia, and Abkhazia on the eastern Black Sea. Indices appropriate for grapevine viability (e.g., Winkler and evapotranspiration) were calculated back to the early Neolithic period, showing that the climate was nearly identical to that of today and ideal for the Eurasian grapevine.

While this evidence sets a new date for the “earliest grape wine,” the search for its ultimate origin(s) is still being pursued. Notes Dr. McGovern, “Other sites in the South Caucasus in Armenia and Azerbaijan might eventually produce even earlier evidence for viniculture than Georgia. The Taurus Mountains of eastern Turkey are also a prime candidate for further exploration with its monumental sites at Göbekli Tepe and Nevali Çori at the headwaters of the Tigris River, dating as far back as 9500 BCE. Grape domestication there is also a possibility. In a time before pottery, bowls and goblets were made of a highly absorbent clay mineral, chlorite.”

Chemical analyses are in progress. 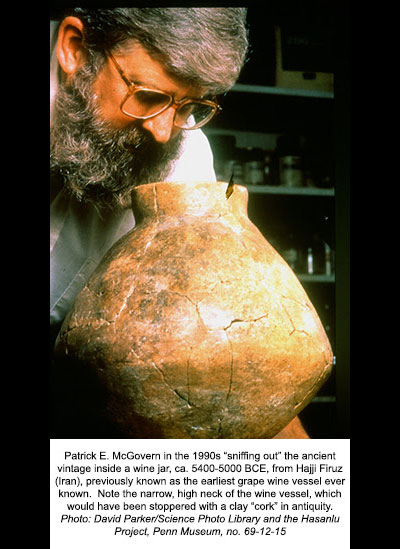 During his decades-long research on ancient fermented beverages Dr. McGovern has explored what he terms a “wine culture” which emerged as humans learned how to tend the grapevine and make wine from it, eventually leading to its domestication and transplantation elsewhere. In a “wine culture,” the drinking and offering of wine penetrates nearly every aspect of life, from medical practice to special celebrations ranging from birth to death (rites of passage, secular and religious festivals, etc.) to everyday meals at which toasting was common. As a medicine, social lubricant, mind-altering substance, and highly valued commodity, wine became the focus of religious cults, pharmacopoeias, cuisines, economies, and society throughout the ancient Near East.

Modern Georgia is especially illustrative of a "wine culture," which reaches deep into the past. Large jars (Georgian, qvevri, recognized as an Intangible Cultural Heritage of Humanity by UNESCO), very similar to the early Neolithic ones found at the ancient sites, are still used today to make wine. The modern jars are buried underground, like those discovered at Areni in Armenia, dated to the Chalcolithic period (ca. 4000 BCE). As yet, no jars buried underground have been found at the SSC sites. But the very small bases of the large wine jars from Shulaveri Gadachrili, and Khramis Didi-Gora would have provided inadequate support for free-standing vessels, suggesting that the Neolithic Georgian jars were once partly or wholly buried underground.

Starting in the ancient Near East, the wine culture then spread around the globe—to Egypt and Shiraz, across the Mediterranean to the Etruscans and southern France, up into Europe, and only very recently to the New World.

The scientific article, "Early Neolithic wine of Georgia in the South Caucasus," is available on the PNAS website.

The Penn Museum (the University of Pennsylvania Museum of Archaeology and Anthropology) is dedicated to the study and understanding of human history and diversity. Founded in 1887, the Museum has sent more than 300 archaeological and anthropological expeditions to all the inhabited continents of the world. With an active exhibition schedule and educational programming for children and adults, the Museum offers the public an opportunity to share in the ongoing discovery of humankind's collective heritage.

The Penn Museum is located at 3260 South Street, Philadelphia, PA 19104 (on Penn's campus, across from Franklin Field). Public transportation to the Museum is available via SEPTA's Regional Rail Line at University City Station; the Market-Frankford Subway Line at 34th Street Station; trolley routes 11, 13, 34, and 36; and bus routes 21, 30, 40, and 42. Museum hours are Tuesday through Sunday, 10:00 am to 5:00 pm, and first Wednesdays of each month until 8:00 pm, with P.M. @ PENN MUSEUM evening programs offered. Closed Mondays and holidays. Admission donation is $15 for adults; $13 for senior citizens (65 and above); free for U.S. Military; $10 for children and full-time students with ID; free to Members, PennCard holders, and children 5 and younger.

Hot and cold meals and light refreshments are offered to visitors with or without Museum admission in The Pepper Mill Café; the Museum Shop offers a wide selection of gifts, books, games, clothing and jewelry. Penn Museum can be found on the web at www.penn.museum. For general information call 215.898.4000. For group tour information call 215.746.8183.