Between the summers of 2018 and 2019, the Museum buzzed with activity behind construction walls. In preparation for the opening of the reimagined Main Level in November 2019, renovations were carried out in the Africa Galleries, Harrison Auditorium, Main Entrance and Sphinx Gallery, and Mexico and Central America Gallery, with object removal and other construction work in the Egypt Galleries and Asia Galleries.

On June 11, 2019, the Museum’s Sphinx made a monumental journey of 300 feet—from his previous home in the lower level of the Egypt Galleries, through the Museum’s Inner Courtyard, and through a window into his new home in the Sphinx Gallery. 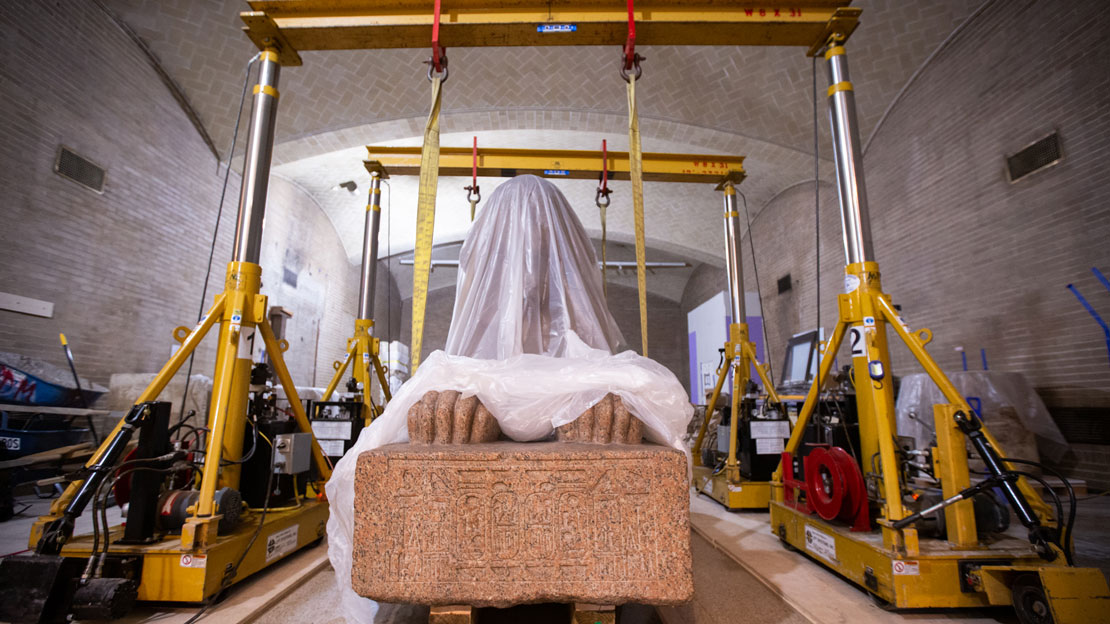 Moving the Sphinx required the expertise and collaboration of expert riggers, conservators, and curators, forming an exacting plan over many months while the Sphinx waited under protective sheeting. 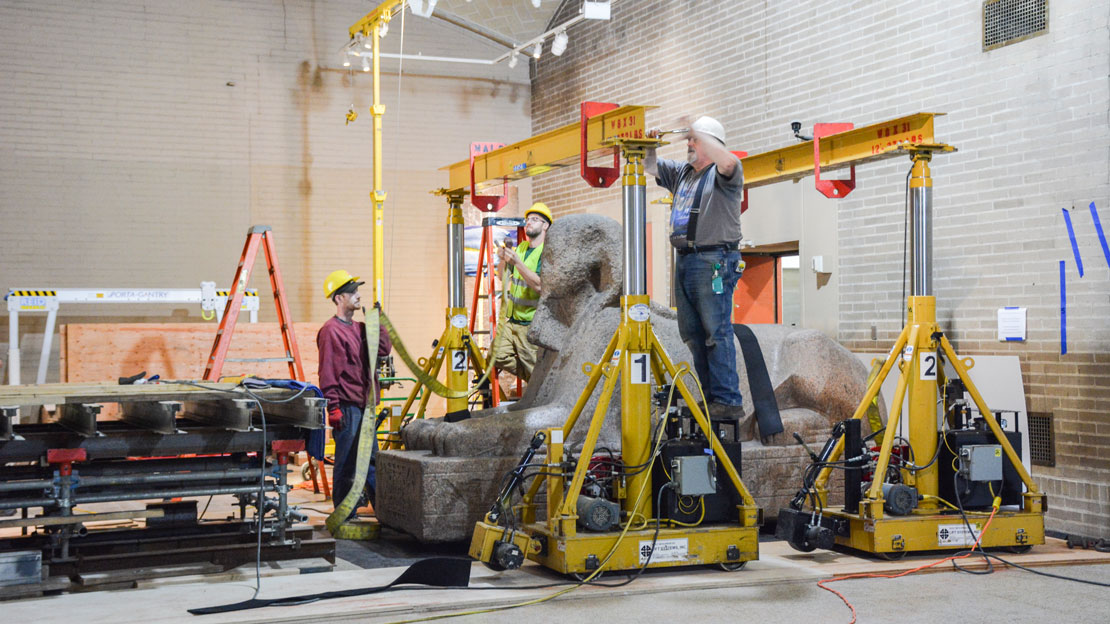 The Sphinx was lifted on a platform of “air dollies” that would glide him along a specially built ramp across the courtyard. 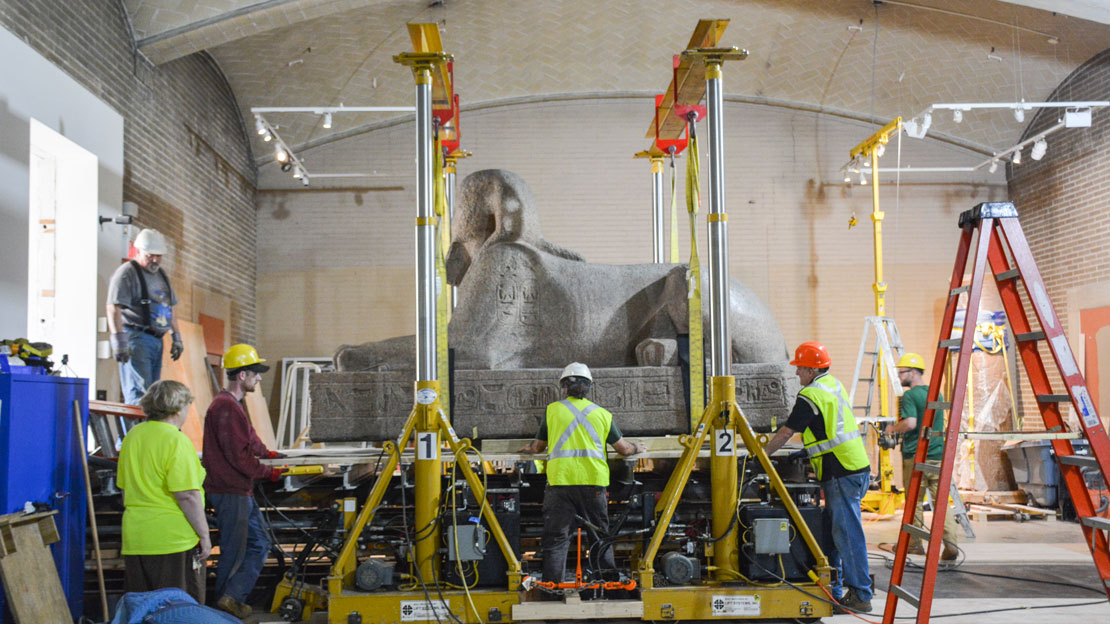 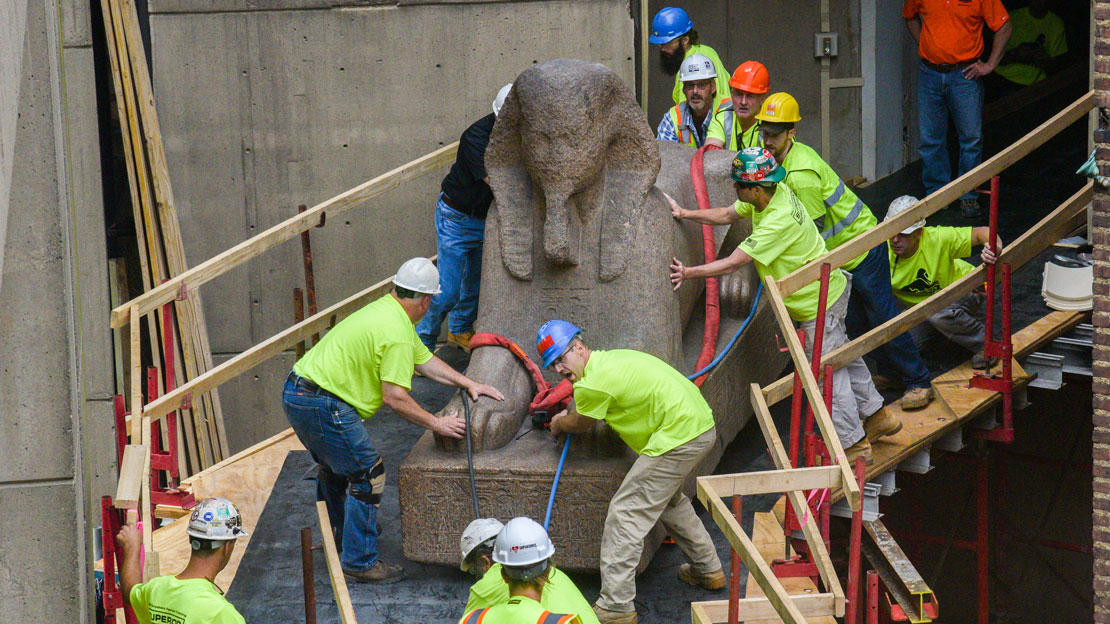 With staff, members, and visitors watching from throughout the Museum, the Sphinx emerged onto the ramp, guided by riggers. 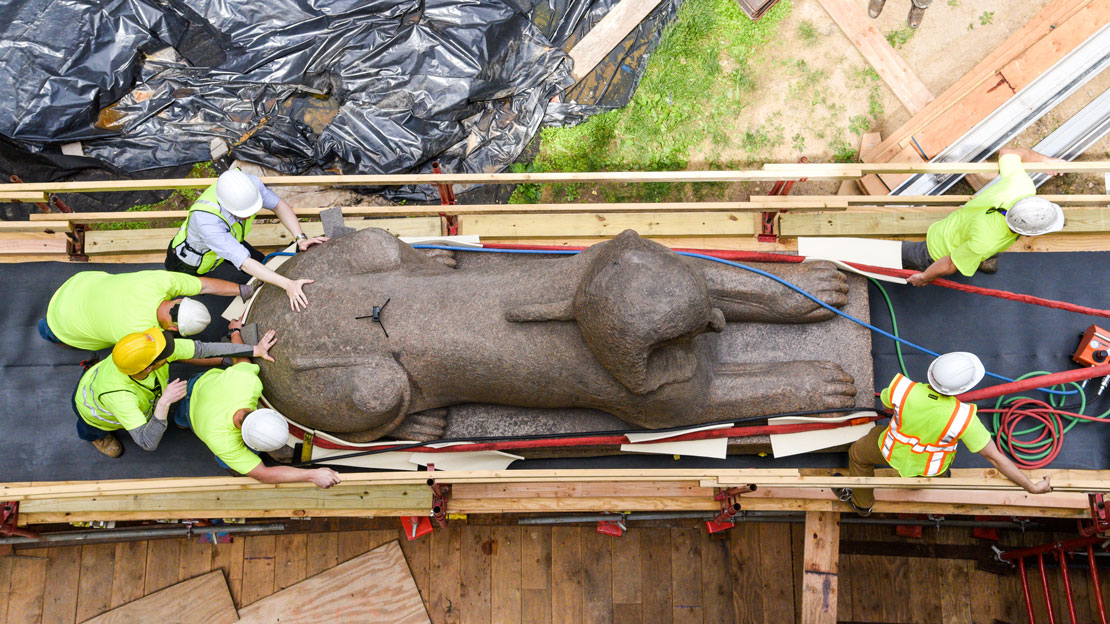 Each foot of his journey was carefully planned and overseen. 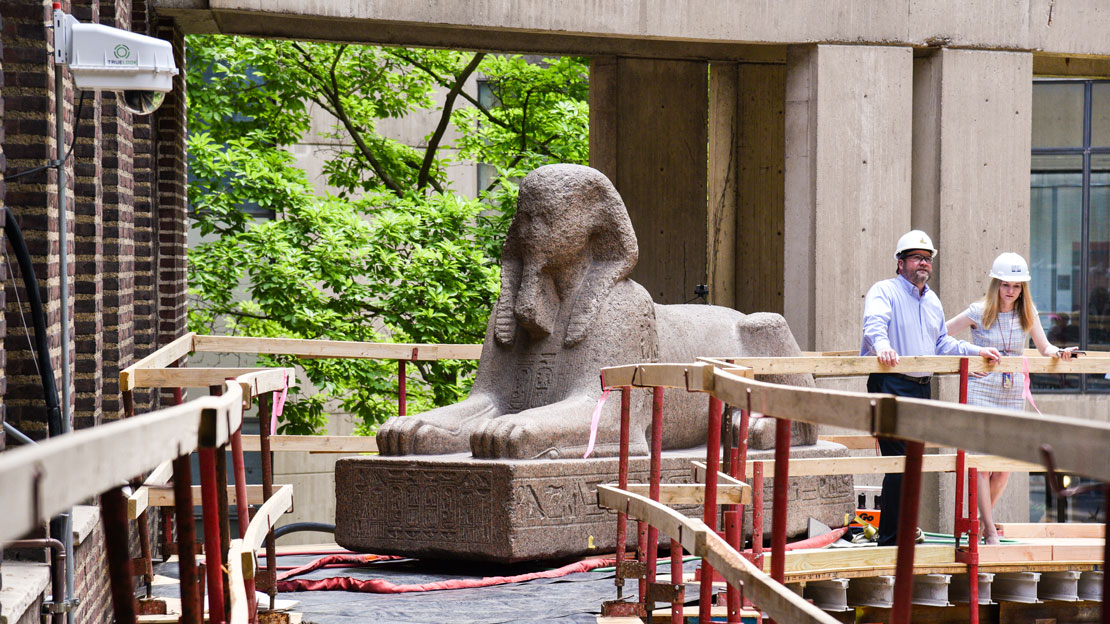 Chief Building Engineer Brian Houghton and Director of Exhibitions and Special Programs Kate Quinn look on as the Sphinx’s progress paused before negotiating a turn. 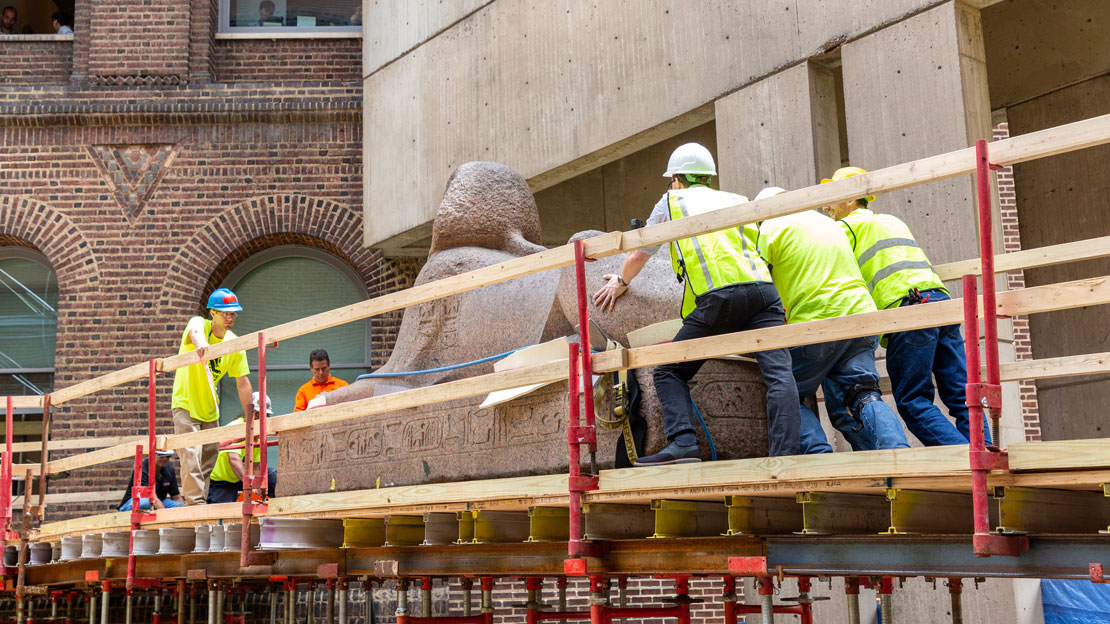 The last step to the Sphinx’s journey took him up an incline and into the Sphinx Gallery through a window on the east side. 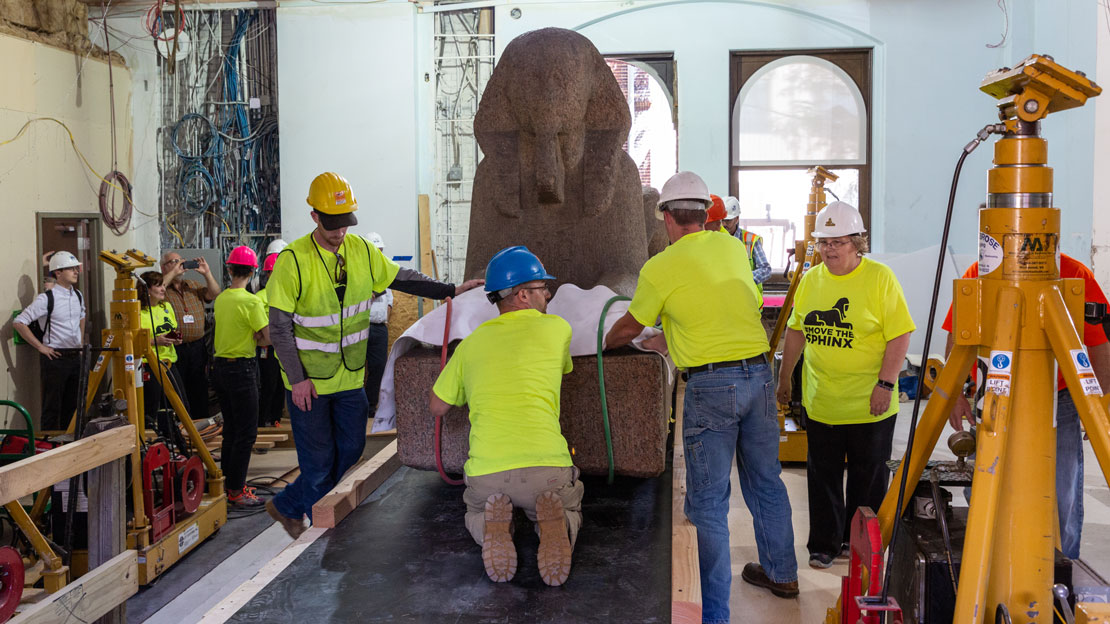 The Sphinx arrived safely in his new home; the Sphinx Gallery would be built around him over the next several months before opening on November 16.
Previous Next

In late summer 2018, some objects were temporarily moved from the Asia Galleries to the adjacent Pepper Hall during work on the air ducts. Objects that could not be moved were carefully wrapped during the work.

After the Egypt (Sphinx) Gallery closed, the challenging process of moving thousands of pounds of monumental objects began. Professional rigging crews worked with Museum conservators and staff to remove many stone objects to an offsite Conservation Annex, where they can be safely stored and prepared for display in the planned Ancient Egypt and Nubia Galleries (targeted opening 2023). The Sphinx remained in the gallery in preparation for his big move in June 2019. As many of the monumental objects were being removed from the gallery, work began on the elevator shaft to connect the lower and upper Egypt Galleries of the Coxe Wing.

With the seats removed and being refurbished offsite, restoring the Harrison Auditorium to its original 1915 splendor—including cleaning the beautiful Gustavino tile and refurbishing the central starburst light fixture—took many months. A new stage (with a new adjacent green room) was built to be fully accessible.

The construction wall in the Main Entrance formed a temporary backdrop to the admissions desk while work went on behind it. The central staircase to the Harrison Auditorium was removed so that a new floor could be created, which would eventually support the Sphinx. The space where the Museum Shop had been was renovated to become part of the Sphinx Gallery and, in the alcove at left, the Judith Rodin and Paul Verkuil Spotlight Gallery. The narrow passageway to the lower Egypt Gallery, through the door at the back of the space, would be renovated and widened to become the light-filled Barbara D. and Michael J. Kowalski Gateway to Egypt.

All objects were deinstalled from the cases in the Mexico and Central America Gallery in preparation for renovation. Monumental objects were reinforced and boxed. Keeper of Collections for the American Section William Wierzbowski watches as riggers remove Stela 14 from its base. Professional riggers worked closely with staff (here, Project Conservator Alexis North and Senior Registrar Anne Brancati) throughout the deinstallation of large objects. Some of these objects were moved offsite for conservation during the renovations.