All the Museum’s a Stage, and All the Visitors Players: Theatricality in the Museum of the American Revolution

Enter the Visitor, strolling down sunny Old City Philadelphia streets, passing by crowds of people, feet slapping along the brick sidewalk. One can imagine children playing around the stone cannons, following their imaginations back in time to become stalwart revolutionaries, becoming a part of the museum. Or perhaps one doesn’t need to imagine. The Visitor, intrigued, heads for the doors in the facade of the new Museum of the American Revolution (MAR), nodding at the American flag suspended above.

The Visitor passes through the doors, flanked by the ultimatum: “Join” or “Visit.” Under the word “Join” there is a Patriot, an American soldier in the midst of a battle cry, ready to defend the liberty and freedom of the People. Under the word “Visit” is a Redcoat, weapon at the ready, prepared to strike. The message seems clear. To Join is to join the ranks of the Patriot, to ally oneself with freedom and the American Dream. To merely Visit is to, perhaps, ally oneself with the British, to see, to fail to conquer, and to return home. The Visitor enters, likely not having noticed the subtle symbolism.

After purchasing a ticket, the Visitor is provided with a wristband and cast in the role of an Audience Member, who is strongly encouraged to wait to see the pre-museum video. In the meantime, the Audience Member may peruse the gift shop or the cafe, making purchases and creating a sense of anticipation for the exhibits. The Audience Member is then prompted to enter the theater to watch a short film about the greatness of the American colonies and the complex inner workings that led to their Revolution. Primed to receive the narratives of the Revolution that the museum has to offer, the Audience Member is ready to assume their new role. As they climb the stairs and enter the “Prologue” room, they become the Player. 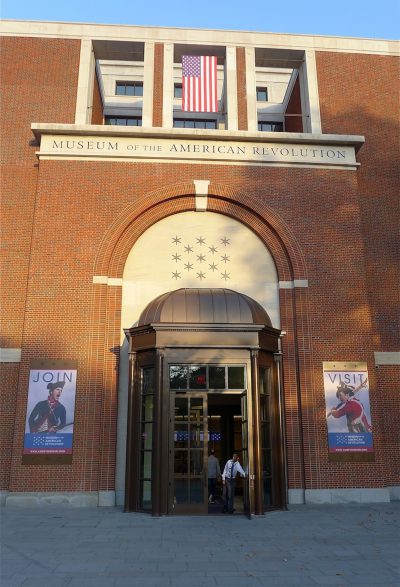 Museum of the American Revolution entrance. Photo by Margaret Bruchac.

In the Prologue Room, the Player stands in a small, motion-sensored room with a wrap-around screen. As people enter, they find themselves among a mob of shouting Americans who are toppling a statue of King George III in the name of liberty. From the start, the Player feels a sense of being implicated in the Revolution, drawn into the crowd, numbered among the Patriots. Throughout the museum, the exhibitions do not allow viewers to be merely inactive bystanders. Instead, people are peppered with interactive elements: Touch the screen to learn more. Open this cabinet for more information. Press this button to see the troops’ movement. Climb aboard to get the feel of a real privateer ship. Listen to the shouting, shooting, groaning sounds of war. Reach out your hand to feel the real bark of the Liberty Tree.[1] 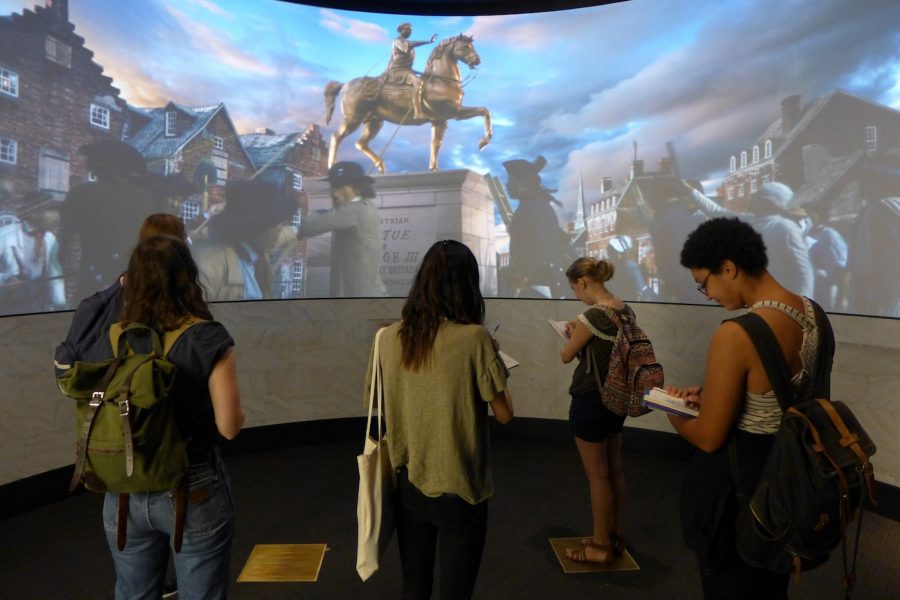 Students from the University of Pennsylvania gather in the “Prologue Room” at MAR. Photo by Margaret Bruchac.

The museum also makes use of “real life” dioramas, with mannequins frozen in the midst of acting out a vivid scene in revolutionary history, further bringing the Player into the world of the Revolution. All the while, the Player finds them self snaking through a continuous labyrinth that progresses through the timeline of the war, further allowing them to feel as though they are transforming along with the nation. This is intentional. As MAR Vice President for Collections R. Scott Stephenson notes, “The idea is that you enter as a subject, but leave as a citizen.”[2]Almost two thirds of the way through the museum, the Player is asked to personally witness the Battle of the Brandywine. I unfortunately did not experience this particular spectacle, but one needs only to turn their attention to the Museum Guide and Map to see how this fits into the overall plan of implicating the audience. The description reads: “Experience the fear and frenzy of being on the front line as you are confronted by an all-out British infantry charge of the Battle of Brandywine.” The Player is thrown headlong into the battle against the British. Rather than meekly taking their seat as an indifferent observer, the Player is attacked by the nation’s enemies, thereby being painted as a patriot and giving charge to this new identity. 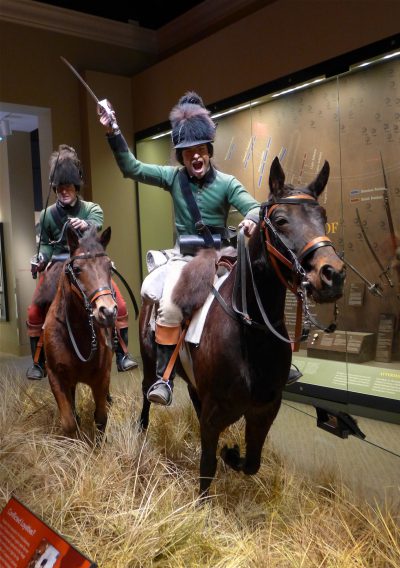 Galloping dragoons at MAR. Photo by Margaret Bruchac.
Perhaps the best example of this phenomenon occurs as the Player makes their way through the final hallway, glancing at nineteenth century photographs of American survivors of the Revolution, veterans who upheld the liberty of the nation that has now lasted for almost two hundred and forty-one years. As they reach the end of the exhibits, visitors are confronted with a wall of mirrors, stating that the Player is now one of these people, a patriot on whose shoulders the future of the nation rests. The Player has officially become a part of the Museum’s narrative, confirming the transformation that has been occurring throughout the exhibit. The Player exits a Patriot, leaving a part of their neutrality behind. As they exit, if they wait to see Washington’s tent, they can be audience members once more, confirming their newfound patriotism. 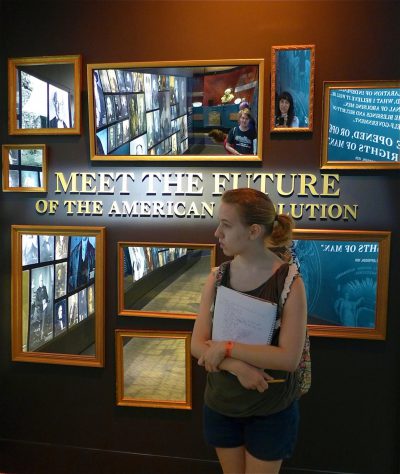 Anastasia Hutnick amid the mirrors at MAR. Photo by Margaret Bruchac.

While reviewing this museum, I could not help but notice the orchestrated effort, throughout, to involve the audience in the subject matter. I could not stop thinking about how the visitors were invited to join the objects, set, and attractions by becoming actors in the museum’s telling of the Revolution. This brought out the theatrical enthusiast in me, as someone who loves to push the boundaries of the theatrical space and subvert the traditionally “stagnant” role of the audience. I found this approach refreshing and engaging beyond the typical idea of “museum authority,” beyond merely presenting a narrative to patrons by calling upon the reputation of the exhibit’s creators and contributors. Admittedly, the more traditional approach continues to work, since audiences do come to museums to be educated. Personally, however, I love to explore new ways of presenting information to an audience, of drawing them into the stories involved. In this way, stories can be given the spotlight they deserve, and audience members can be pulled into ongoing and enlightening discussion and debate about these stories that remind us of our own place in history.

That being said, any theater enthusiast will tell you that a show is rarely if ever truly “finished” on its own; it needs to be presented to an audience to proceed in its development. Thus, while I applaud the premise and the staging of the Museum of the American Revolution, I find it to be a piece in progress that still needs work. When using the interactive approach, the museum could scale back on certain elements to focus more wholly on others. Certain activities—like the interactive touch screens—felt forced upon visitors, while others—such as the privateer ship—felt flat and unexplored. The ship had no interactive options, but merely seemed like a nice place to take pictures or let children run wild. Given that the signs prompted visitors to question which choices would best befit a privateer, more information could be incorporated into the ship display to continue in this vein. Perhaps there could be typical ship’s chores for visitors to “perform,” or other ship-related activities. 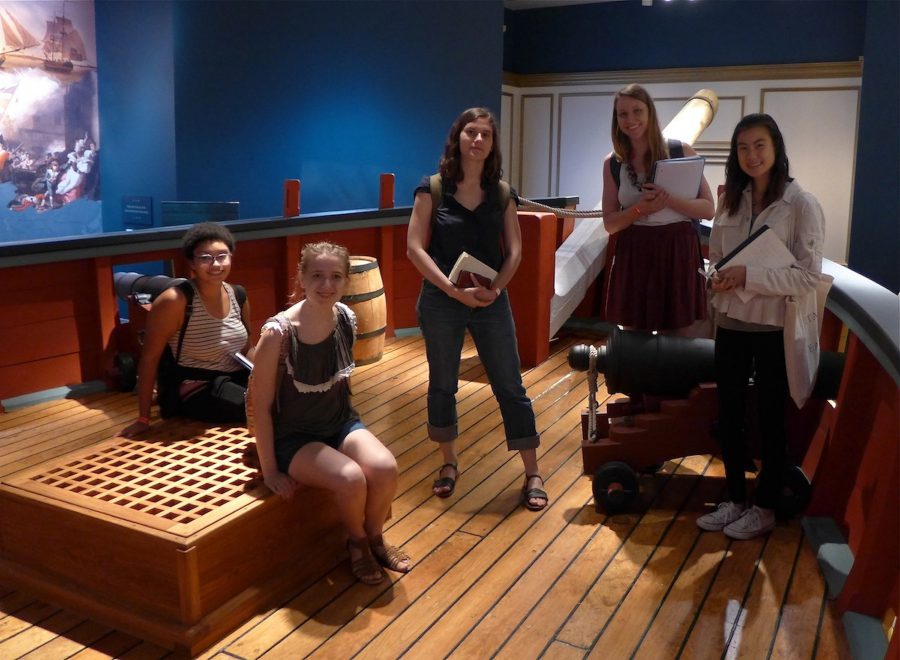 The museum seems to be a bit over-ambitious in the desire to represent all people and all stories involved in the American Revolution. Certain groups’ testimonies felt rushed and glossed over. For example, throughout the museum, Native Americans are mentioned briefly, bringing the audience to believe that they will be discussed in full detail later. Yet, in the room concerning the Declaration of Independence, discussing the state of liberty for all Americans, Native Americans are strangely absent. In the previous room, they had been listed as “the In-Between,” or as “Neutrals” shoved as a whole into a side category. 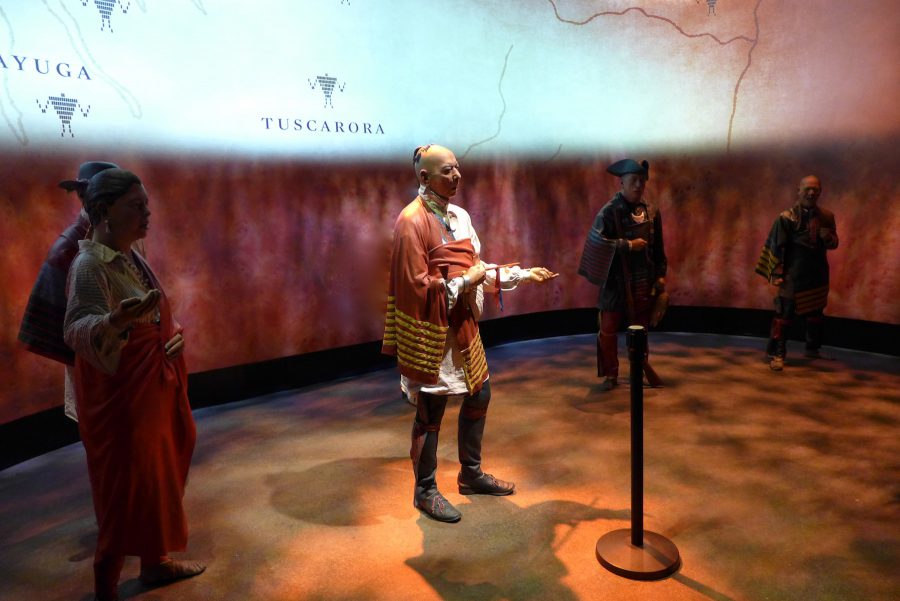 The Proclamation of 1763—the violation of which resulted in further loss of Native American land—was glossed over in the beginning of the exhibit, and subsequent mentions of Native Americans seemed brief and vague. When we finally got to the gallery promising us more of the story, it was a large, almost empty space. In the Oneida Nation Theater, we saw a filmed staging of an imagined discussion among tribal leaders on whether or not the Oneida Nation should join the American cause, complete with life-sized mannequins to illustrate the discussion.[3] Along the wall is a map of Native American tribes and descriptions that briefly detail each tribe’s involvement in the war. Yet, the result felt underwhelming and incomplete. I understand that the museum has limited space and that the stories of the Revolution are many and varied. The museum needs to focus on which stories they want to tell and represent that subject matter well. Although claiming to present an all-encompassing narrative of American liberty, they miss the mark in representing many perspectives.

That being said, it was truly enlightening for me to witness this recently born museum, and I truly believe that it has great potential. I can’t wait to see where it runs to with its theatrical and engaging approach, and I hope that it hones its storytelling capabilities. It has so much to offer, and I believe that by inviting multiple audiences to consider their part in the American Revolution, the museum will further its ability to deliver knowledge to the Visitors who enter and the Patriots who leave.

This museum review was conducted for the Fall 2017 University of Pennsylvania course “Anthropology of Museums.” Students visited exhibitions and collections at a selection of Philadelphia museums. To compose these reviews, they analyzed content, themes, audience, message, design, interpretive strategies, and cultural representations vis-à-vis specific individuals and objects. Each student selected material on display that reveals unique insights into particular collectors, curators, and communities, and discussed the use of specific strategies for making these people and objects visible in public museums.

For an overview of museums visited by the 2017 Anthropology of Museums class, see:
• Margaret Bruchac, “Visualizing Native People in Philadelphia’s Museums: Public Views and Student Reviews,” in Beyond the Gallery Walls, Penn Museum Blog, December 2017.