This Inuit doll and her parka, Objects NA2549 and NA2550, respectively, were acquired by the Museum in 1914 from collector Henry F. Ford. Ford also donated 59 other objects from the Hudson Bay Area, including various articles of clothing, toys, and tools. This doll with her parka, however, is the only one of its kind in the collection. This particular doll comes from Baffin Island in Canada, located in the northeastern Hudson Bay area near Greenland. Aside from these facts, little else has been documented about her. I must admit that it was this mystery about her that drew me to her, as well as the beauty in her construction. I instantly wanted to know her story. 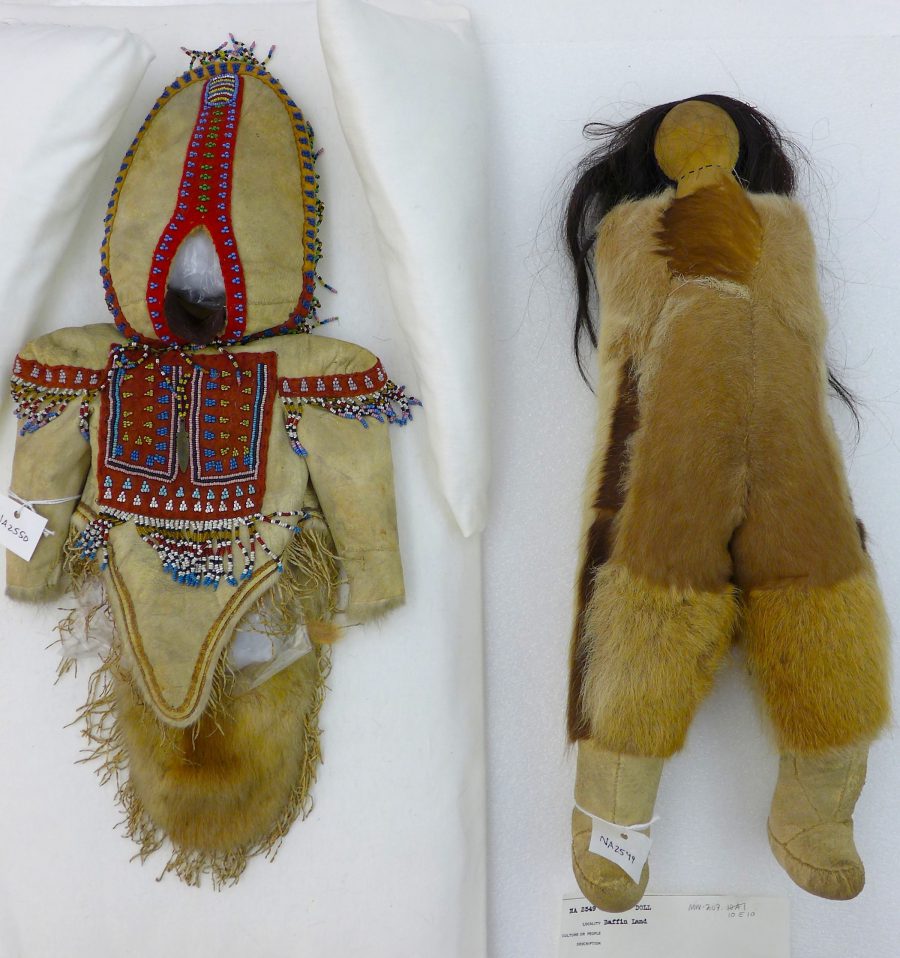 Though the exact materials used in making the doll are undocumented, one can see from examining her that she has been entirely made from furs and skins, and her hair appears to be human hair. Around her neck, one can see black stitches, though her hair is held in place by two vertical black stitches running along the back of the head. If one looks closely at her face, one can see the remnants of eyes and a nose that had been drawn on and long since faded. From a tear in her midsection, we can see that she has been stuffed with a coarse white material, though she still feels soft when held. She has no arms, which may be explained by the fact that the sleeves on her parka are so thin as compared to the doll. She appears to be wearing an under outfit with kamiks, or boots, which were constructed to be part of the doll itself.[1] The “clothing” part of her body is made with various colored pieces of fur which are held together by the white stitches that loop around her body. She has dark brown stripes of fur on the outside of her legs, a patch of brown fur covering her chest, and beige fur from her boots to the middle of her thighs over the top of tan fur covering the rest of her body. Traditional Inuit clothing involves several layers, with the fur of the outer layer facing outwards, which can be easily seen with this doll.[2] She appears to be in good condition despite a few small holes and tears.

Her parka was made as a miniature version of a beaded amauti with shoulder pouches. This amauti is created with the fur side of the pelt on the inside, and with various colored pieces sewn onto the front, shoulders, and edges of the parka. The parka is also adorned with colorful beaded patterns and fringes, denoting the time, care, and luxury of the parka. One particular fringe bears a bronze-colored pendant at the end of it. The parka has two tails at the front and the back that would have been created to fit its intended wearer, as this amauti is created to perfectly fit the doll. The parka is traditionally made with caribou skin, with fringes along the edges.[3] 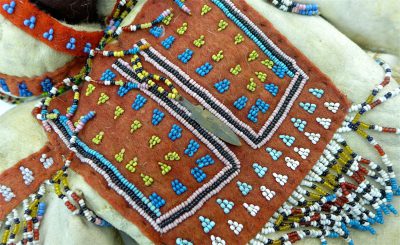 Detail of the front of the Inuit doll’s beaded parka. Note the miniature copper neck knife, an essential tool for everyday use. Photo by Margaret Bruchac.

One can also see a pouch for a miniature child on the back of this parka. The amauti is a woman’s hooded parka designed so that she can carry her infant to toddler-aged child. The mother would carry her child inside the amauti on her back. The looseness of the garment would allow her to bring her child around to the front to breastfeed as needed, allowing her the freedom to move and work without restriction while caring for her child. The typical amauti does not have beads, since beaded parkas take extra time and dedication to create.[4]

In examining this Inuit doll, I compared this doll’s parka to a woman’s beaded amauti in the Museum collection, Object NA2844, which had come into the Museum’s possession in 1913 from Repulse Bay, modern-day Naujaat, which is located in the northern Hudson Bay Area west of Baffin Island. This amauti is made of caribou hide and glass beads. Compared to the doll’s parka, the life-sized amauti has much more intricate beadwork and stitching, with many more layers of fringe as well as a scene of a ship beaded in the top of the hood. The woman’s beaded amauti also illustrates the personal nature of the parka, how it was designed to represent its wearer. The detail of the adult parka mirrors the attention to detail in constructing the doll’s parka, which radiates a similar presence of craftsmanship and style. The doll’s parka also appears to be to scale when compared with the woman’s parka, further emphasizing the careful eye of its creator. Dolls and their clothing in some regions were typically made with the same hides used to make regular-sized clothing, so it this doll’s parka was likely made out of the same caribou hide used for a girl’s or woman’s parka.[5]

Although it is not uncommon for both men and women to sew (as clothing repair is crucial for survival in the bitter cold), women typically are the tanners and seamstresses in the Inuit household.[6] Therefore, this doll likely would have been made by a woman. Clothing is traditionally considered a work of pride for an Inuit family, as it incorporates the skill of the men who hunt and the skill of the women who tan, design, and sew.[7]. Dolls such as this one were created across the Arctic region of North America and Greenland.[8]. Other dolls in the Arctic region have been carved from wood, ivory, horn, or whalebone and dressed in traditional clothing.[9] The clothing would usually be created with an intricate eye for realism and art, as seen with this doll.

These dolls were typically given to young girls to teach them about Inuit cultural traditions.[10] Perhaps this doll with her woman’s proportions and amauti was used to teach its recipient about the tasks of women and mothers. One can easily see the love and care given to this doll, whose stitches are so fine, whose attention to detail is exceptional, and whose condition is impeccable given that she is at least one hundred and three years old. The child who received her truly must have been fortunate to have someone who would give so much time and care to create her.

This object analysis was conducted for the Fall 2017 University of Pennsylvania course “Anthropology of Museums.” Students are examining Native American objects in the American Section of the Penn Museum by combining material analysis (elements, construction, design, condition, etc.) with documentation (texts, photographs, ethnographic data, etc.). Since some objects have minimal provenance data, we seek out similar materials, consult research articles and archives, and consider non-material evidence (oral traditions, ecosystems, museum memories, etc.) that might illuminate these objects. This research is designed to expand our understandings of object lives, using insights and information gathered from inside and outside of the Museum.

For an overview of the 2017 object studies in the Anthropology of Museums class, see: