Like “a limpid bubble” floating atop the crest of a silver wave, the Crystal Ball that anchors the vaulted ceiling of the Chinese rotunda has an exciting and mysterious past. The forty-nine pounds of transparent quartz crystal is supposedly from the imperial collections of the infamous Qing dynasty Empress, Cixi (1835 – 1908). Cixi was a concubine who rose to the position of Dowager Empress during the latter part of China’s Qing dynasty (1644 – 1911). The end of the Qing dynasty was a period filled with political and economic distress and Cixi was not loved or revered for her lavish tastes and luxurious lifestyle. When her palace was ransacked and she fled Beijing, many of her precious belongings were dispersed. Purportedly among her possessions was a flawless, crystal ball – believed to be the crystal ball now owned by the Museum. 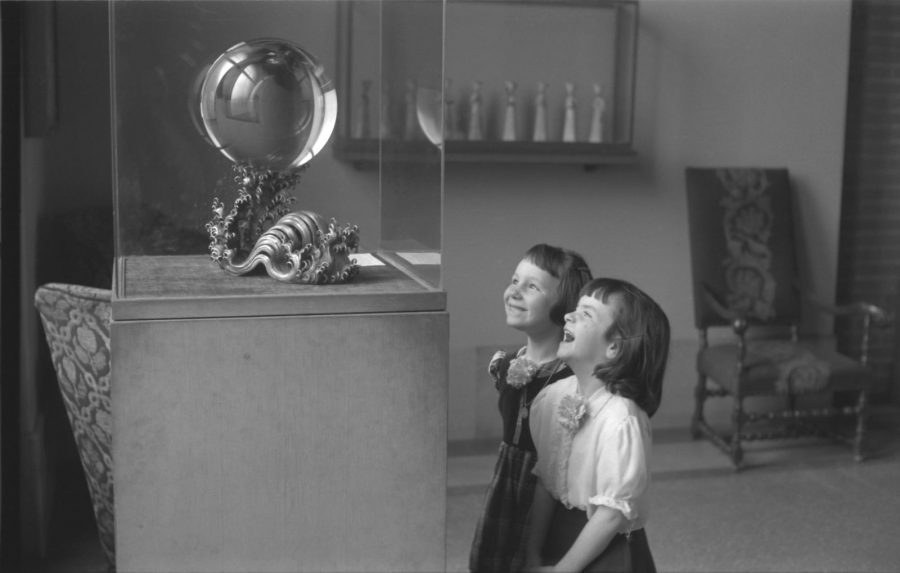 In January of 1927, Eldridge Reeves Johnson, the founder of the Victor Talking Machine Company (sold to RCA in 1929) and benefactor of the Penn Museum, was mesmerized by a large crystal sphere for sale at the John Wanamaker store in Philadelphia. He wrote to the director of the Penn Museum, George Byron Gordon, that he was interested in purchasing the crystal and was wondering if the asking price of $50,000 was appropriate. When Gordon unexpectedly died later that month from a fall, Johnson bought the crystal and donated it, along with several other objects, to the Museum as part of the Gordon Memorial Collection. The Crystal Ball then enjoyed a peaceful sixty-one year stint as one of the Penn Museum’s best-loved objects.

The Crystal Ball then became the spotlight of attention when it was mysteriously stolen from the Museum in November of 1988. How the crystal ball was stolen and by whom is still unknown, but there are several clues as to how the theft possible. Earlier in the month, the museum had hired new guards who were unfamiliar with the museum. The night that the crystal ball was stolen, the security alarm was tripped twice. The first time, earlier in the evening, the new security guard called the university police and found out it was accidentally tripped by museum staff painting in the gallery. The second time, later in the evening, however, the guard, feeling sheepish about the previous false alarm, did not take any action. The Warden entrance was also under construction and was covered only by plywood slats. The next morning, the Crystal Ball and a small, bronze, two-thousand year old Egyptian statuette of the deity Osiris were found to be missing. Investigators concluded that the thief used the Osiris statue to smash the Crystal Ball’s glass case before making off with both objects. The silver bronze wave-shaped stand that held the Crystal Ball was found abandoned on the South Street bridge by a student who had once studied drawn it for a class, but no other clues as to the objects’ whereabouts were to be found.

Three years later in 1991, Near Eastern scholar and museum research associate, Jes Canby walked into a thrift store on South Street, across the Schuylkill River from the Museum, and saw the Osiris statuette casually sitting on a shelf. Questioning of the store-owners revealed that the Osiris statuette had been bought from “Al the Trashpicker”, together with a table, for thirty dollars. Al led the trail back to Lawrence Stametz who, while cleaning out his nearby garage storage space, which over the years he had lent out to various acquaintances, had come across an “ugly” statuette and a crystal sphere, which he had likened to “an alien egg” and its guardian. While the statuette had made its way to Al, Stametz had thought the crystal sphere an appropriate gift to give a friend who was fascinated by the Occult. The Crystal Ball was thus tracked down to the home of Kim Beckles in Hamilton, New Jersey. Ms. Beckles was surprised to find she had a priceless relic in her house. She had originally placed the Crystal Ball in her window; however, after light passing through the crystal nearly burned her arm, she moved it away from direct light and her husband then began to use the imperial crystal as a hat stand.

Finally, after a few more legal entanglements and the paying back of the insurance money which the Museum had luckily not spent, the Qing dynasty Crystal Ball and the two-thousand year old Osiris statuette were returned to the Penn Museum, where they can be enjoyed today.

– Written in concert with and based on the lecture and slides of Alex Pezzati, Senior Archivist at the Penn Museum.