Hidden Histories at the Historical Society of Pennsylvania

An old brick building in downtown Philadelphia, almost hidden, tucked away between main streets, houses the Historical Society of Pennsylvania. This local history museum focuses on Philadelphia and the surrounding region; a similar museum in Pittsburgh is the Historical Society of Western Pennsylvania. Both act as community resource centers, archives, and libraries where people of various interests, heritages, and professions can engage with local histories.

Sarah Heim, Assistant Director of Research Services, gave us a brief overview of the history of the Society. In the aftermath of the American Revolution, there was a growing interest in maintaining local history. The Society, founded in 1824, mainly functions as a special collections library, emphasizing family histories from the colonial era to immigration histories to the present day. It holds over 20 million manuscripts, and 600,000 printed items.During our behind-the-scenes tour, we visited the first floor, open to the public with two main parts: the computer area and the archive viewing area. This is a fascinating dichotomy of the “old” and “new”—a hot topic in the digital humanities. The Historical Society prides itself in its use of technology to create online exhibits, catalogue, and “Digital History Projects” that showcase various themes and topics. One areas of focus is the Pennsylvania Abolition Society, which offers an interesting look at local African American abolitionist politics.

We sampled the resources like a visitor would, starting with the online collections to find a topic. We found virtually no subject guides on Native American histories or people in the region. What we could find, though, was information on the United American Indians of the Delaware River Valley (UNAIDRV), an urban Native American Center that operated in Philadelphia from 1963-1992.[1]

Typically, guests request documents, and employees of the society collect them for viewing. We were offered the very special opportunity of joining our guide in the archives to look for documents in the restricted stacks. We traveled through labeled rows, various manila cases of folders, and high-reaching stacks, like a maze. We found our box that pertained to the UNAIDRV, and proceeded to tour the rest of the floor.

I was particularly interested in the conservation wing, where various methods and technologies are used to keep books and manuscripts in good condition for storage and display. Specially trained conservationists have their own area to examine and protect any and all documents that come their way. Along one wall, we passed a timeline of various recording devices. The empty scene of desks covered in projects featuring various bound books, maps, and photographs, was intriguing. This points to how big this seemingly small institution is, being able to maintain thousands of primary sources and published documents in good “health.” Documents are living entities, in this way.

The tour included a brief tangent about local research and ghosts. Random as it seemed, it was actually quite fascinating to hear stories of library employees who had encounters with lingering “spirits” attached to the archives.[2] As I mentioned before, documents are living entities, carrying a likeness of agency and lives of their own. Our discussion about ghosts seemed to reinforce my belief quite firmly. The curator who shared these stories suggested that time is “interdimensional;” therefore, we see pockets of time as opposed to “spirits.” Our visit to the Society was close to Halloween, making this exchange seem eerily timely. 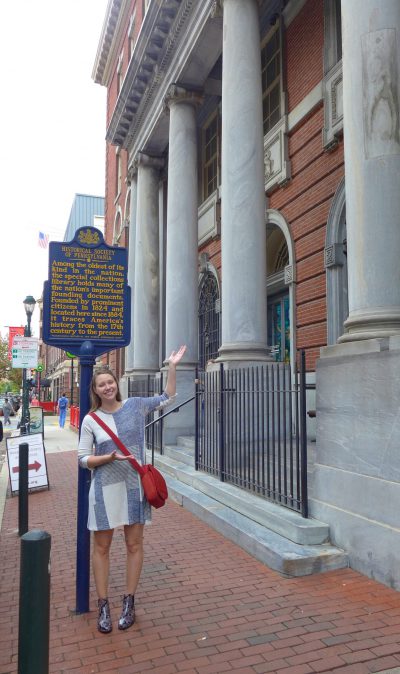 Lizzie Oakley at the Historical Society of Pennsylvania. Photo by Margaret Bruchac. 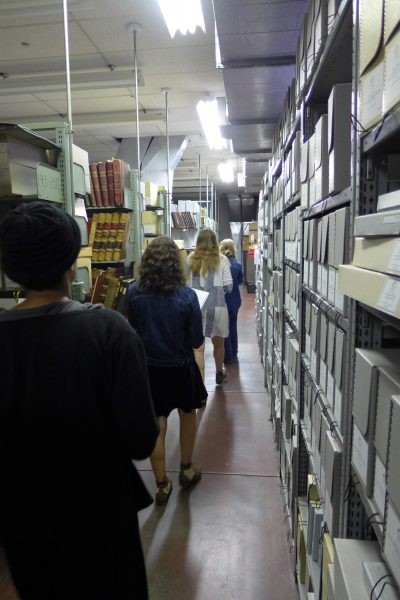 Students in the storage stacks at the Historical Society. Photo by Margaret Bruchac.

We proceeded to the Reading Room to look through the documents we collected. While the organization seemed to be quite random, I found the moments of flipping through these folders, full of photographs and people’s memories, to be quite touching. I particularly liked a photo of a Native woman in front of the Delaware River Valley urban Indian Center.[3] In the 1970s, the UNAIDRV organization bought a row house on Chestnut Street in Old City, Philadelphia. This young woman stands by a door which she holds ajar, with an inviting smile on her face. Unfortunately, the center did not last; it was closed down in the 1990s due to political differences. But in the moment that I was flipping through these photos, I could feel the energy of these community organizers and activists, whose legacies, I hope, continued elsewhere. 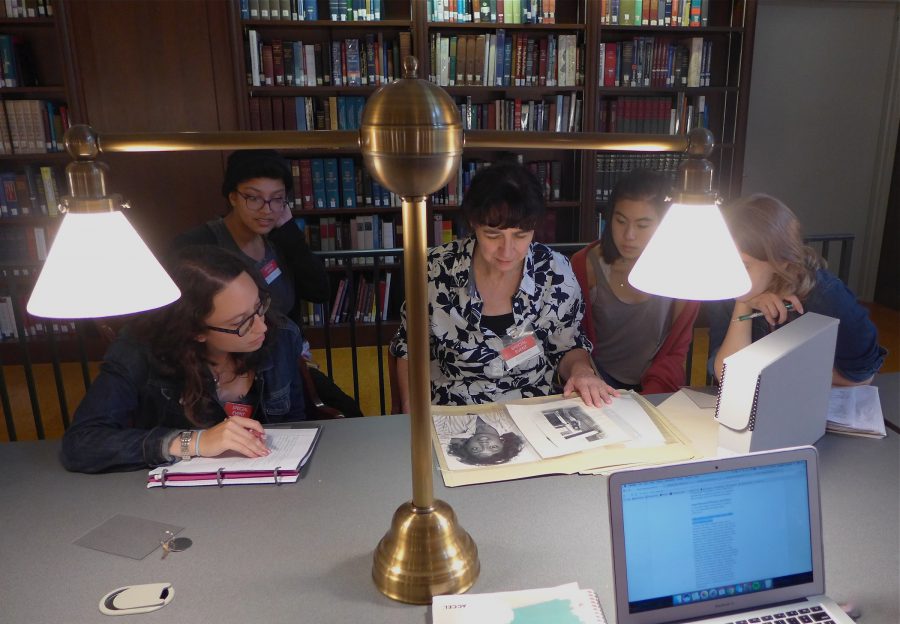 This led us to a discussion of “hidden histories.” It was quite difficult to find references to Native Americans in the Historical Society, despite the long history of Native Americans throughout the state and in Philadelphia. Many of the people we saw in these photographs and documents were unidentified. Here, as in other museums, Indigenous peoples are often “othered” and detached from their contexts. Similar erasures can be seen in places like Penn Treaty Park where, William Penn supposedly signed a peace treaty with the Lenape tribe under a tree. Today, most of the signage in the park focuses not on living people, but on the tree.[4]

This trip inspired me to think more about how we can bring Native American archival information to the forefront of these institutions, and how important it is to bring these narratives back to the surface. In this and other museums, a tremendous amount of time and resources are put into technological advances, but only part of the story is told. When museums distance themselves from Native American history, this makes it difficult for visitors to understand the continued existence of Indigenous people in Pennsylvania and in the United States as a whole.

This museum review was conducted for the Fall 2017 University of Pennsylvania course “Anthropology of Museums.” Students visited exhibitions and collections at a selection of Philadelphia museums. To compose these reviews, they analyzed content, themes, audience, message, design, interpretive strategies, and cultural representations vis-à-vis specific individuals and objects. Each student selected material on display that reveals unique insights into particular collectors, curators, and communities, and discussed the use of specific strategies for making these people and objects visible in public museums.

For an overview of museums visited by the 2017 Anthropology of Museums class, see:
• Margaret Bruchac, “Visualizing Native People in Philadelphia’s Museums: Public Views and Student Reviews,” in Beyond the Gallery Walls, Penn Museum Blog, December 2017.