Training Day: Evacuating a Simulated Gallery in an Emergency Drill

In addition to being a staff member at the Museum, I’m also enrolled as a student at Penn, in the Master of Liberal Arts program. It’s a very flexible program in terms of its schedule, which is great for people like me who work full-time jobs; it also offers considerable flexibility in terms of its content emphasis, which is great for the scatterbrained, “free-spirited” of us who refuse to make up their minds about what they want to be when they finally grow up.

This semester, I’m taking ANTH 527: Cultural Heritage and Conflict with Dr. Brian I. Daniels, Director of Research and Programs for the Penn Cultural Heritage Center at the Penn Museum (PennCHC). I was familiar with Brian’s work before I signed up for the class; he served as co-curator for the Museum’s current special exhibition, Cultures in the Crossfire: Stories from Syria and Iraq. Dr. Daniels is also the PennCHC’s principal coordinator for the Safeguarding the Heritage of Syria and Iraq Project (SHOSI), which responds to threats against cultural heritage in the Middle East through research, training for local museum professionals, public outreach, and the use of modern technologies to monitor destruction. 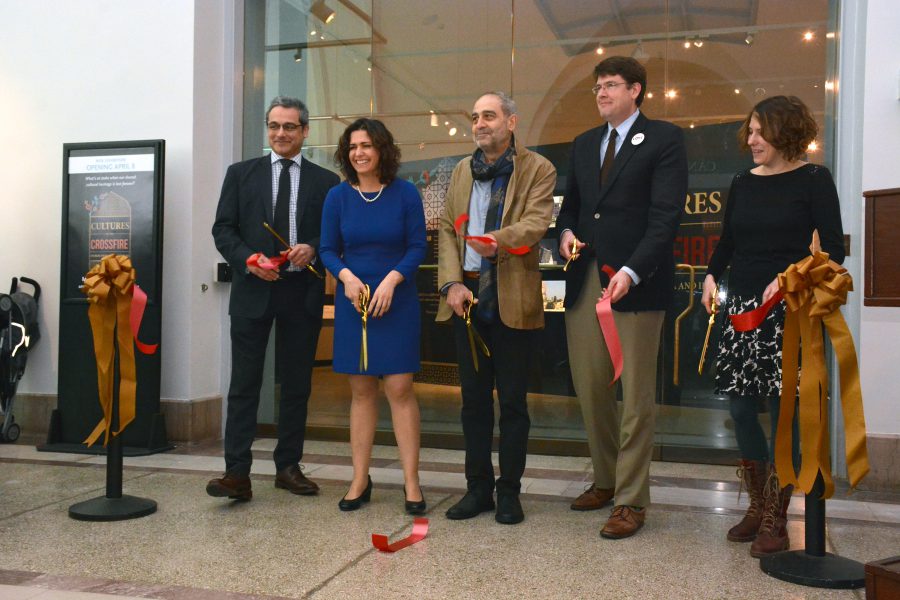 So far, the class has been equal parts eye-opening and painfully depressing. But we were promised as much from the first class session—and even before, really, if we’d taken the time to interpret the course title. Readings have covered topics ranging from sovereignty over human life and death, to religious and political iconoclasm, to negative heritage. I chose this class to dig a little deeper into the field of anthropology, which is all around me every day at the Museum but which is something I’ve never studied in an academic setting (my background is in communications); I also wanted to learn more about some of the issues at play for archaeologists and anthropologists—now, in the past, and in the future—with regard to cultural heritage protection and preservation. Most of our class sessions are based on dissection and interpretation of the readings assigned for that day.

One class session earlier this month was different. The students, seven of us (down from eight due to an illness), had studied a handbook titled Endangered Heritage: Emergency Evacuation of Heritage Collections, a publication of the International Centre for the Study of the Preservation and Restoration of Cultural Property (ICCROM). The handbook offers instructions for how to deal with a real-life situation in which objects or sites of cultural significance were in immediate danger of harm or destruction—such as a flood or building collapse, or even worse, an armed conflict. 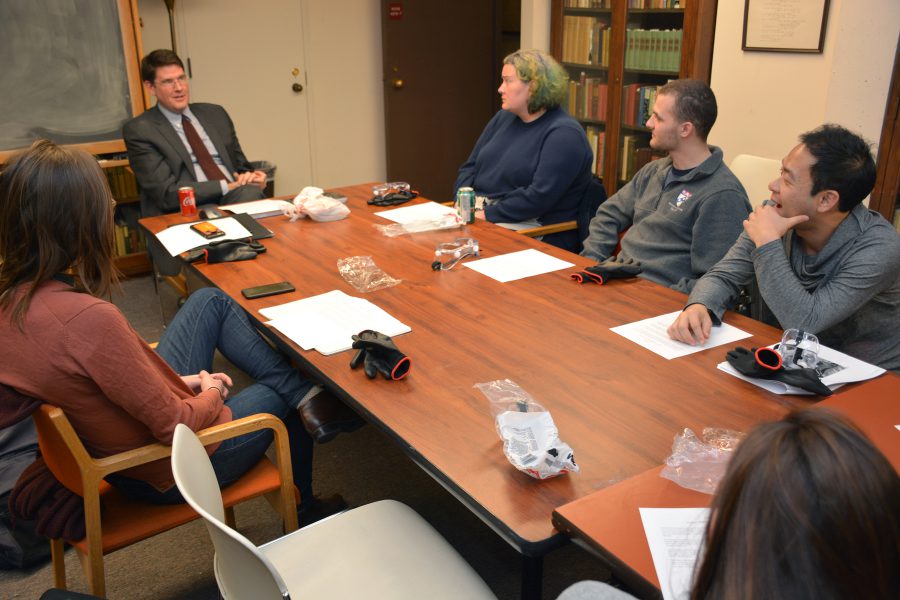 For this class session, we were tasked with handling a mock scenario along these lines: the museum galleries had been badly damaged from a bomb blast, and it was our job to safely remove the “objects” from three “display cases” and transport them to a safe location, all while documenting the process and the items we were handling. I’d been looking forward to this class session with some enthusiasm since reading an article in The Atlantic from last December, which explores the Smithsonian’s Cultural Rescue Initiative and its HEART (Heritage Emergency and Response Training) project. It describes Dr. Daniels’ participation in a drill with some two dozen museum and cultural heritage professionals, acting out the role of an obfuscating, know-it-all museum director who tried to make the best of every opportunity to complicate the team’s assignment.

Our class’s exercise began with Dr. Daniels handing out printed descriptions of the scenario, in which the building’s integrity was failing, and we had only one hour to safely remove the “objects” from simulated vitrines in one room and move them back to our classroom, one floor up (this is all taking place in the academic wing of the Penn Museum, where my class and many other Penn Anthropology courses are held). He also distributed a modest sampling of materials that would come in handy during a situation like this, such as paper, plastic bags, gloves, safety goggles, and napkins. We had about 20 minutes of time among ourselves to map out a general strategy for the exercise—who was responsible for which job, which “objects” were top priorities, and how to best get them back to the safety of the classroom. The team placed me in charge of the operation, which gave me a long leash to document the scene and our progress clearing it. 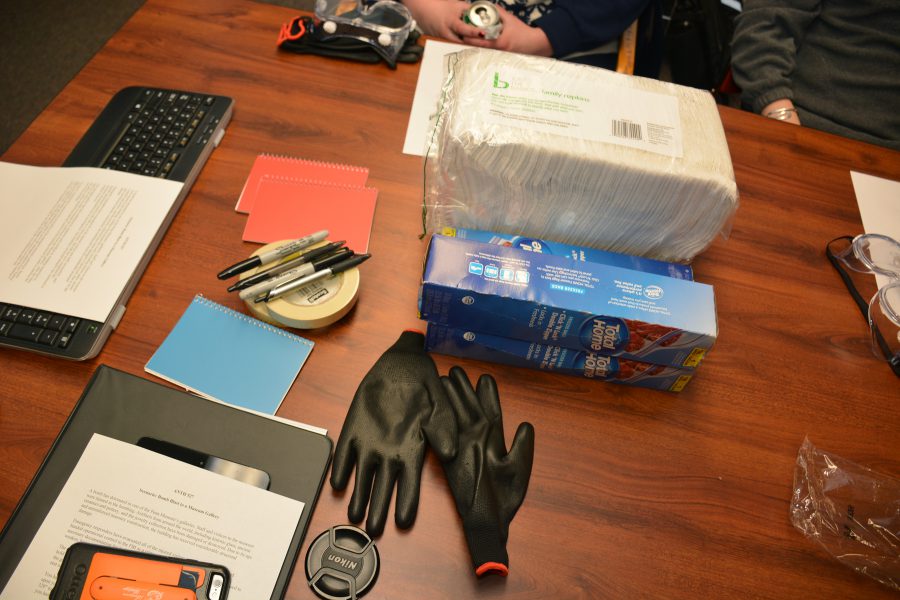 A smattering of supplies to assist us in the exercise.

We trekked down one floor and approached the “damage site” (actually one of the Anthro Department’s labs), where the door flew open and a man in a sharp suit and a crew cut charged into the hallway with a loud “Stop!” He identified himself as Special Agent Jake Archer with the FBI’s Art Crime Team, and reiterated our terms of engagement here: we had only one hour to conduct our work before our safety would be at risk. He took my name as team leader, and allowed us to begin addressing the damage to the simulated museum gallery. I knew a curveball had been coming our way, and I found it amusing that Dr. Daniels had brought in a friend to play the role of FBI guy. 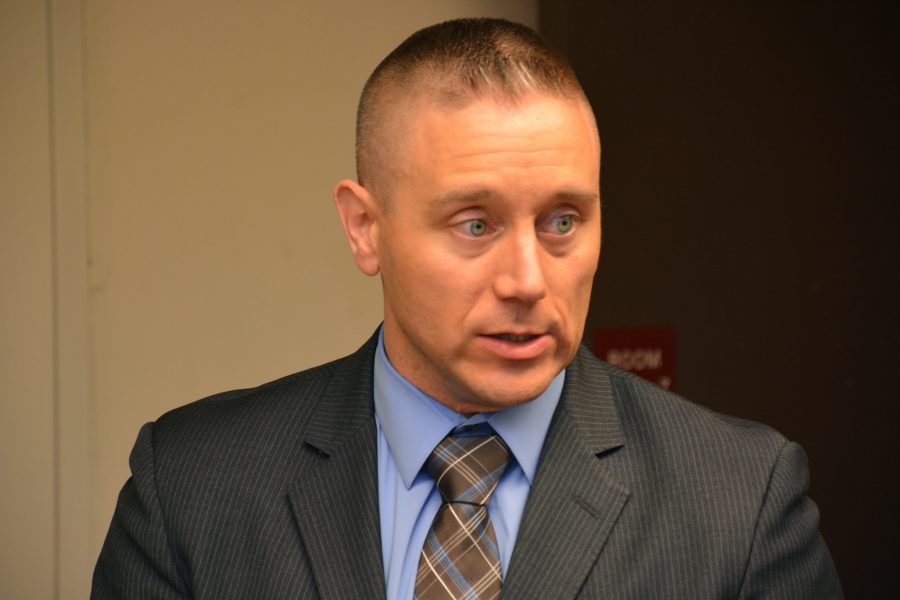 We were stopped by a man who identified himself as Special Agent Jake Archer with the FBI’s Art Crime Team.

Three tarps representing vitrines were blanketed with a variety of objects of various natures (none of which, I should note, were of any real cultural or historical value). I took photos of these three areas to document their condition before any of our team touched anything. The objects were generally arranged based on their material: one section included jewelry, generally undamaged and most easily accessible among the cases, which made this case the top priority; another featured ceramics—some of them decorated, most of them damaged but some intact; and in a third area, an indiscernible mess of broken glass, with two intact vessels off to one side. 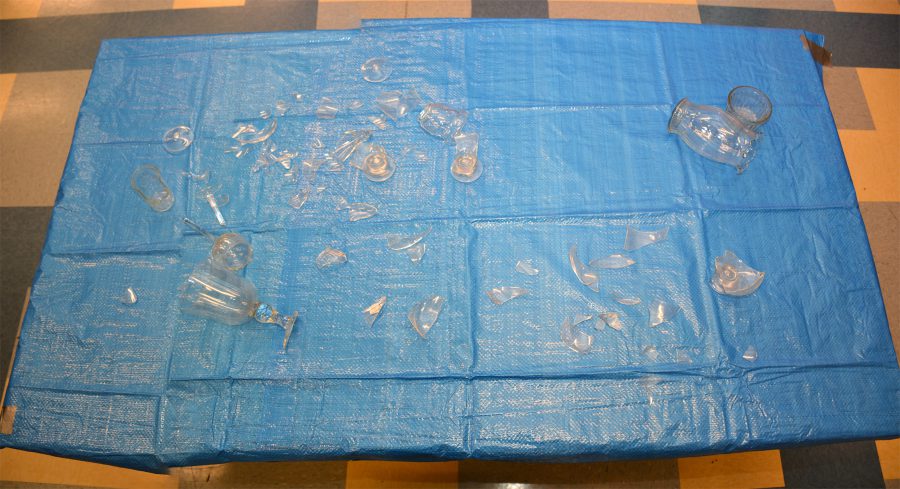 I took photos of each area to document the condition and location of the objects when we began our work. This image shows a stitched composite of two photos in order to show the area in full.

While I documented the scene and the action with my camera, each team member took up a specific job. Carlos laid down tape to indicate sections within each area, to help with documenting their original arrangement before we began packing them. Then, he worked with Heidi Ann and Jungseop to work on documenting the ceramics table—assigning unique numbers to each object, noting the object type and materials, and indicating its location within the “grid” (a term I’m using very loosely in this situation). In the meanwhile, another group consisting of Alex, Gracie, and Lisa began documenting the area we’d designated as a priority, the one covered in shiny, intact objects like jewelry. 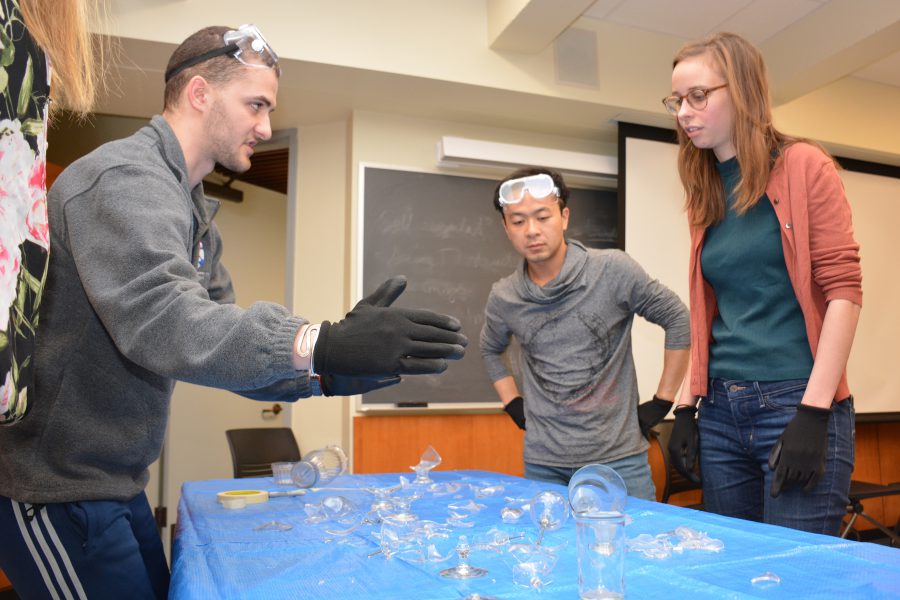 Carlos, Jungseop, and Gracie strategize before taping down a grid. 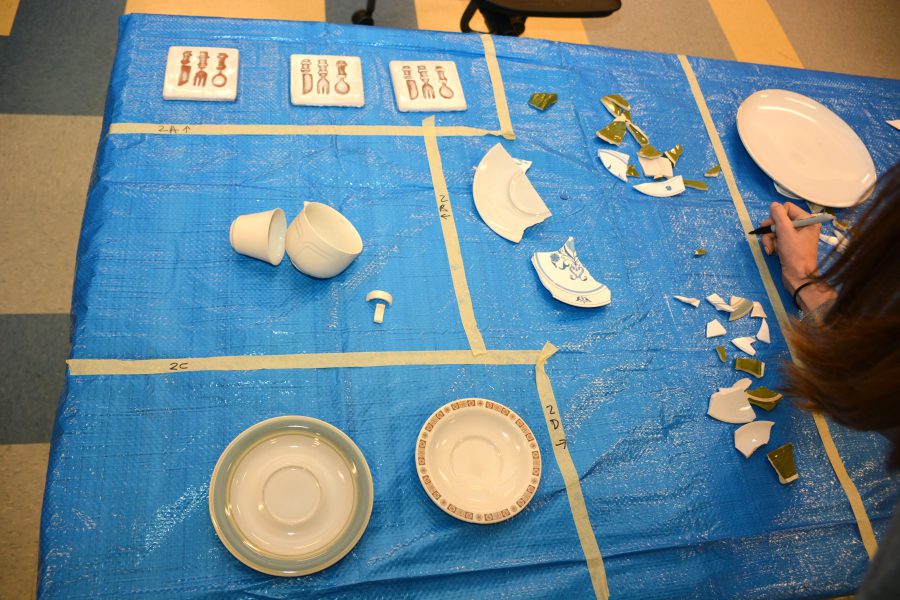 This grid is a little cleaner. It divides Area 2 into five distinct sections, which Lisa is labeling on the taped gridlines.

Knowing this exercise was coming, I had taken the time to make copies of a spreadsheet illustrated in the ICCROM handbook to facilitate the documentation process. Dr. Daniels did say, before we got started, that we could use anything nearby or in our possessions to facilitate our progress, so I didn’t really feel like it was cheating. After all, a good museum registrar should have a contingency plan for just this situation, and the materials necessary to carry it out. 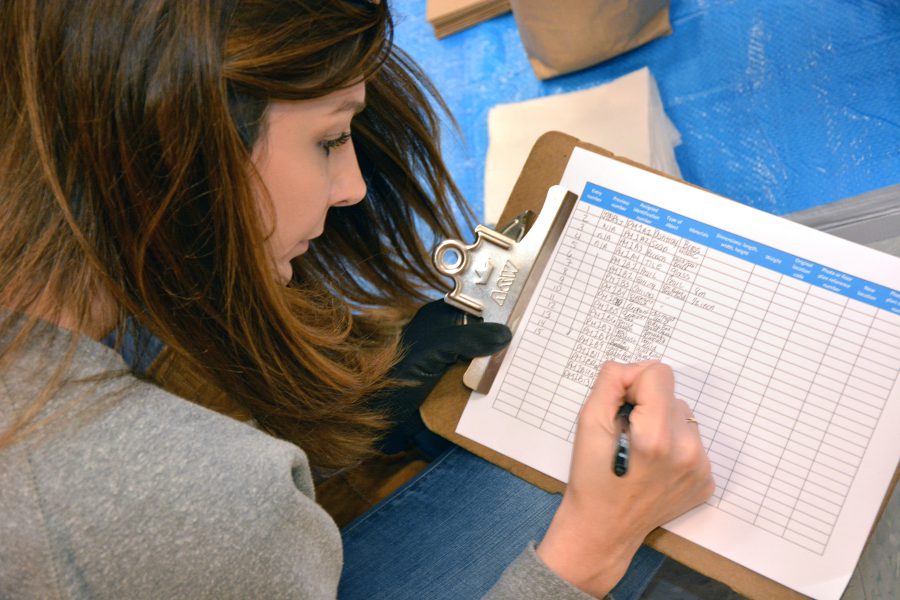 Lisa fills in a spreadsheet of the objects to help track them during their relocation. 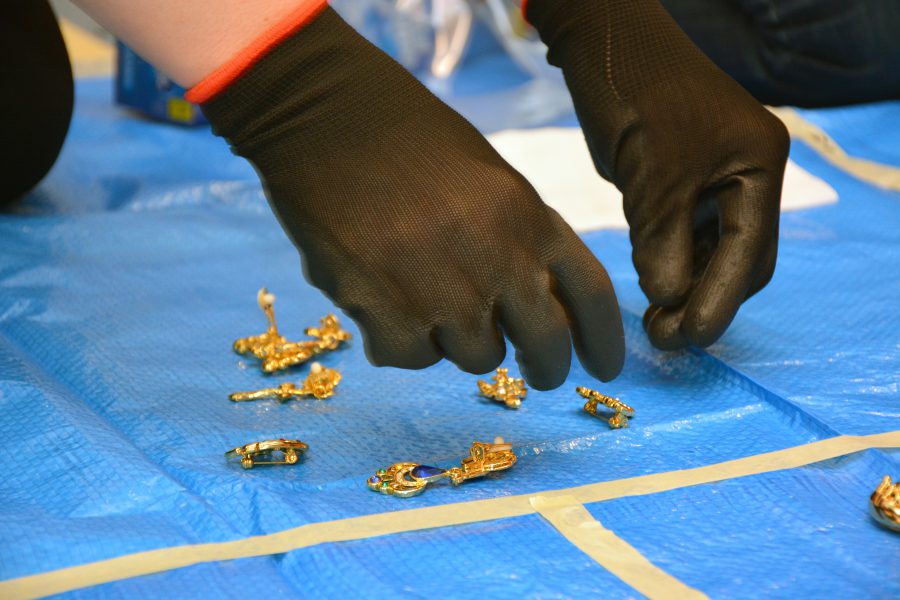 Objects that were fully intact or made of precious material were our first priority. 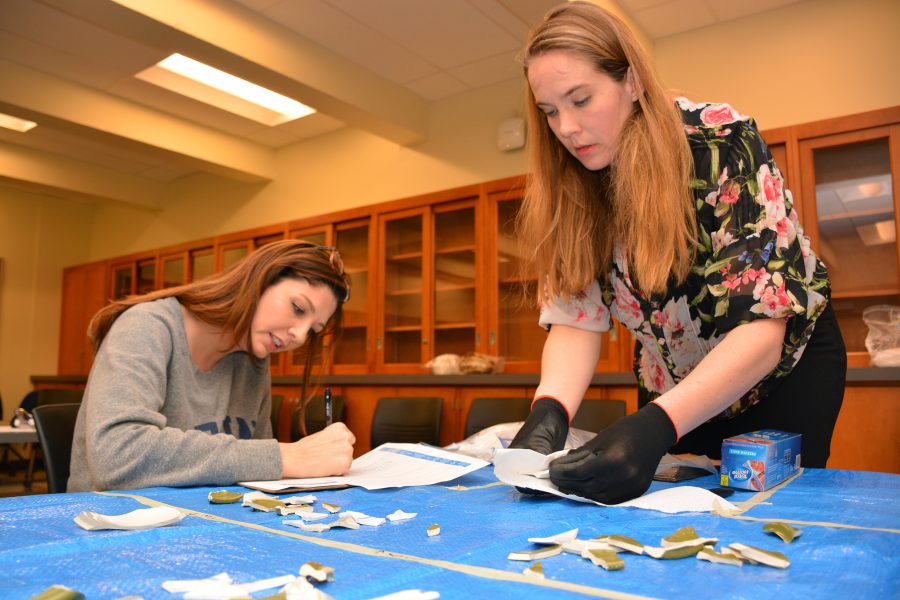 Lisa writes while Alex wraps an object in a napkin, which will serve to cushion the object as well as label it for later identification.

Soon, we had a box full of objects from Area 1 packed and ready to go. We’d designated Heidi Ann as our courier, and Gracie as manager of the safe site to which the objects were being relocated. So, with Agent Archer’s permission, the two made the trip up one flight of stairs to deposit the first box, while the rest of us continued to work with the damaged “gallery.” Heidi returned on her own, and continued to courier boxes to the safe space by herself as they were made ready by the rest of the team. 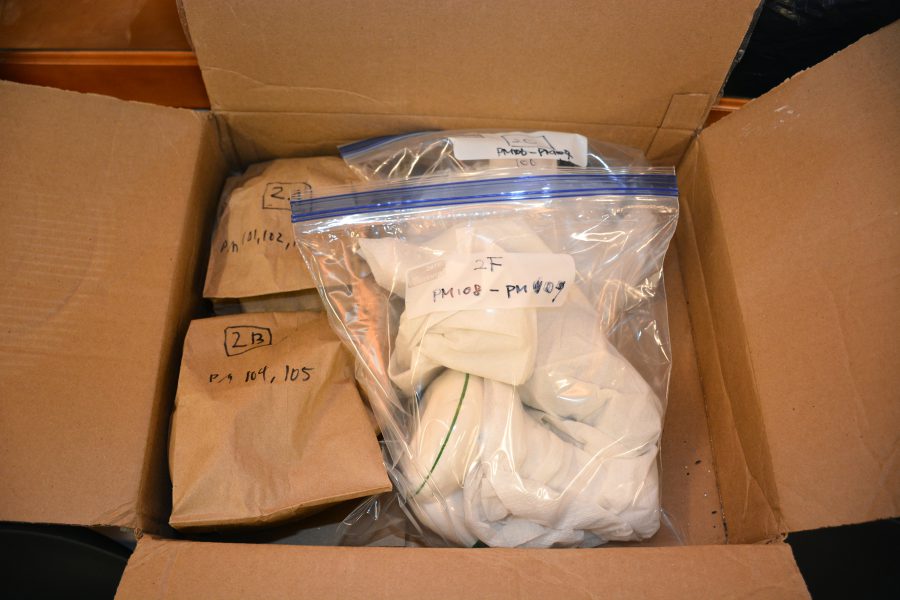 A nearly full box of packed objects shows them wrapped in paper and plastic bags, marked with their newly assigned object numbers and their original location. 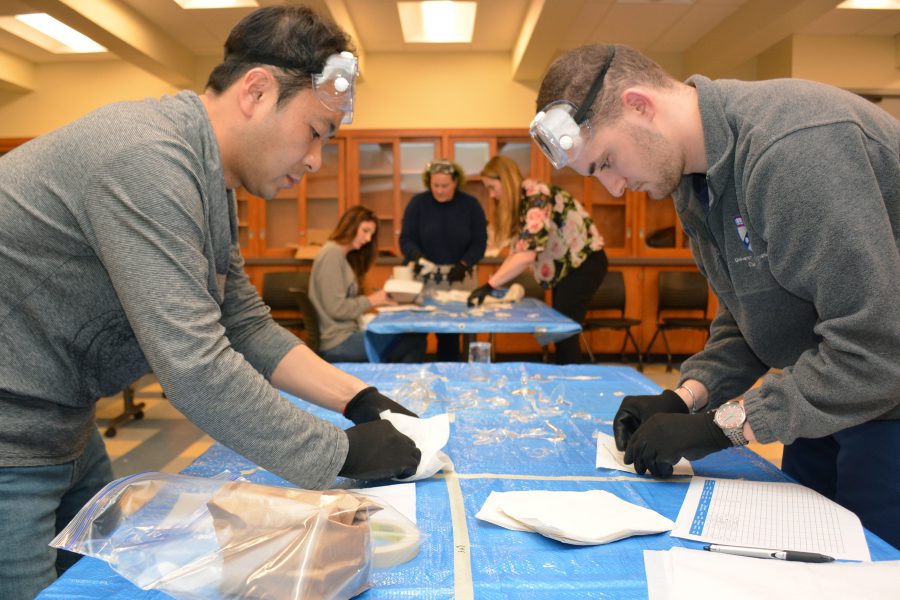 The team works quickly to complete the exercise within the narrow window of time. 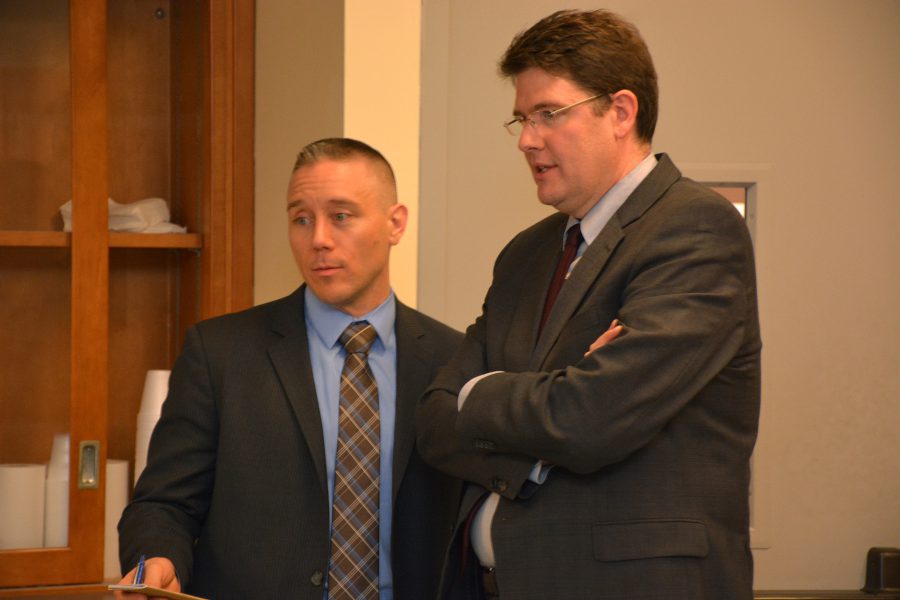 Agent Archer and Dr. Daniels watched as we carried out our duties.

We were on pace to complete the task before the hour was up. Suddenly, the lights in the room began to flash, and Agent Archer notified us of an emergency update: the building’s integrity was failing, and we had only 60 seconds left to finish. We hastily swept the remaining shards of glass into a bag, piled what we had left into a box, grabbed our belongings, and hurried out the door. One floor up, Gracie had a big head start on organizing the packed objects that had arrived throughout the course of the drill. 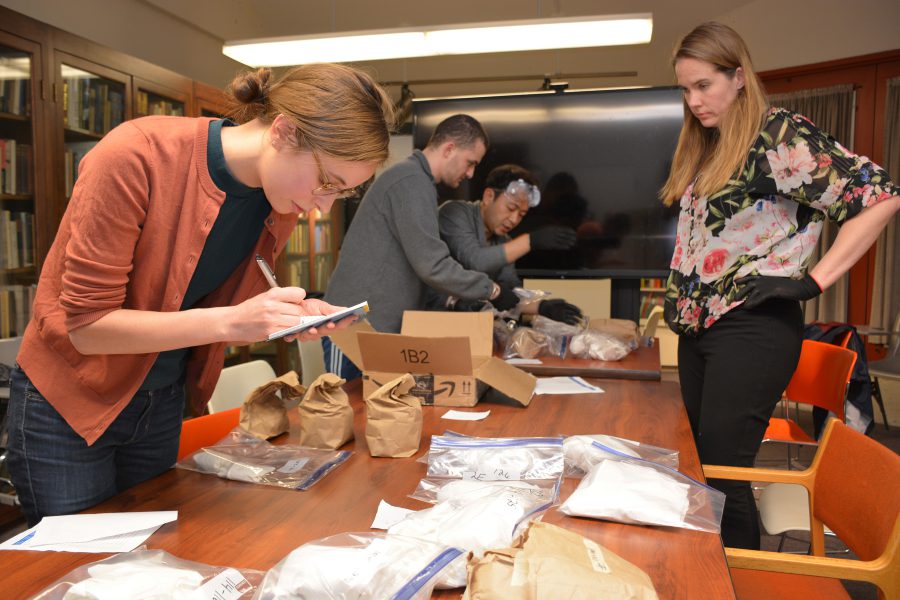 Gracie logs the objects as they arrive in the safe room. 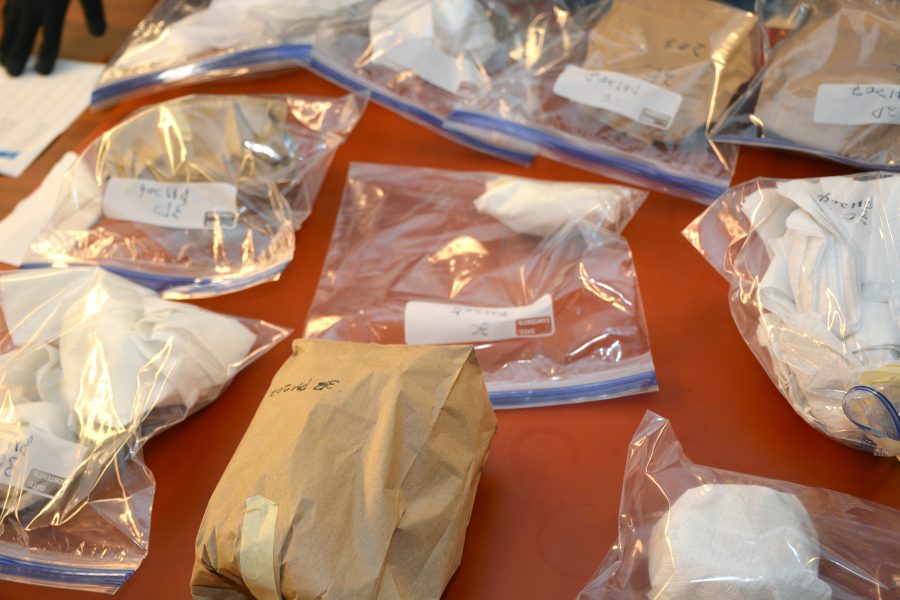 The objects, packed in marked bags, are lain out according to their original location. 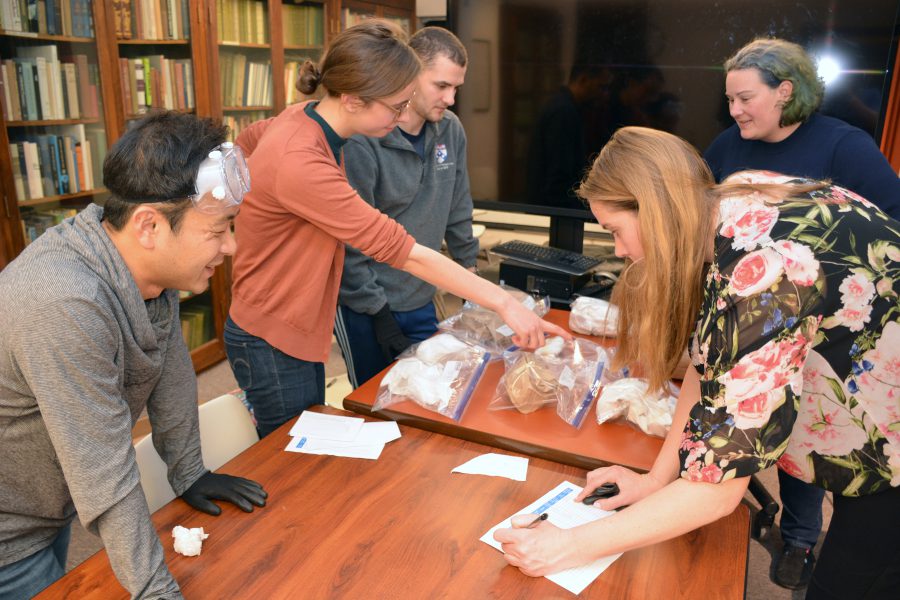 A final check ensures that all objects are present and accounted for.

When the dust had settled, it was time to evaluate the team’s performance. It was at this point that we discovered that Agent Archer was no actor (as I’d assumed), but is indeed a Special Agent with the FBI’s Art Crime Team. He had taken notes throughout the exercise and had documented our various successes and failures. In general—for a first attempt—he felt we did a pretty good job. We had some semblance of a plan and some organization to our work, and did manage to clear the room of all the objects, intact and broken. 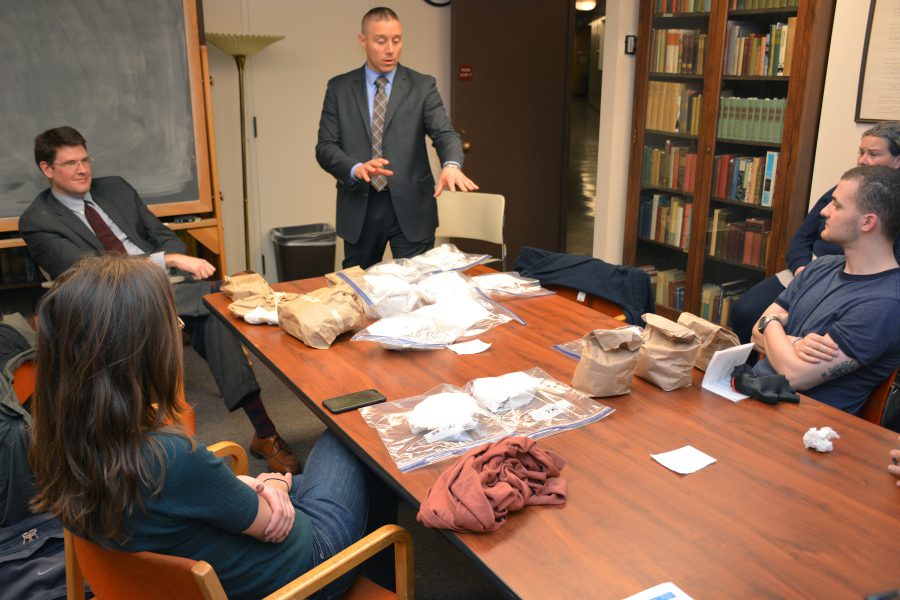 Agent Archer speaks to the class after the conclusion of the drill.

We had some shortcomings, too, and he laughed as he pointed some of them out. For example, the “gridlines” you saw above were not exactly up to his standards; we kept them short so as not to push pieces of objects around, without really taking into account that they’d already been pushed around during the initial episode of damage. Other misappropriated energy was spent pinpointing unnecessarily descriptive object names (“turtle brooch,” for example). As project manager, one of my biggest mistakes was to send Heidi Ann to courier objects on her own; in a real-life scenario, she might have been traveling a potentially hazardous route between the operation space and the safe area, and having a companion would have helped her to overcome obstructions or call for help if necessary. 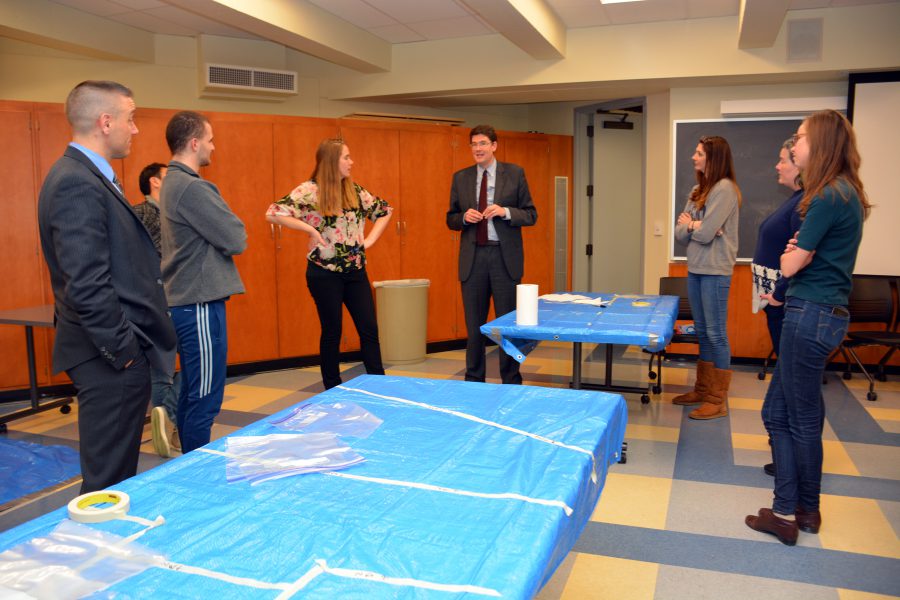 For something that lasted only about half a class period, this exercise was a very effective method of illustrating the many challenges that museum professionals and cultural heritage experts face when working in an emergency situation. Evacuations of museums and other such collections almost never occur under ideal circumstances; as such, it’s imperative for those who work closely with these collections to prepare for any type of disaster, and have concrete plans in place for the day that hopefully never, ever comes.

All photos by the author.