I am in a van, avoiding the rain at the National Museum which has the only functioning wireless connection around. Apparently a Japanese fishing trawler ripped up the fibroptic cable in the middle of the Atlantic, and the whole country lost internet service for two days. This sounds a little overblown and I admit I don’t really know what a trawler is, but I will take that as my excuse for not checking email for the past two days. (That was really difficult. I may have gotten delirium tremens there for a while.) Today, we went to the Sheldrick Elephant Orphanage to “adopt” an elephant for the Penn Museum.  Jenn also renewed her adoption of Mwende and Kibo for her children’s school. We drove about half an hour away from the city center of Nairobi to get to the elephant sanctuary. I spotted a small dark shadow making its jagged way across the dirt parking lot. The shape triggered some sort of archetypal sense memory – the summation of every nature documentary I’ve ever seen about Africa. It was a dung beetle actually rolling it’s precious cargo across the lot. It had rolled the dung into a perfect ball, pushing with its back legs. I never thought I’d see one in real life.

The sanctuary was beautifully constructed right out of the red earth. A canopy of trees and vines seemed to hang over every nook and cranny. Even the birds seemed to be auditioning for a Disney movie, darting close to the ground through the cascading morning glories.

We were led to a roped-off open area. A few aluminum bins of water and over-sized baby bottles full of milk were propped around a small mud hole. The whole place had a monastic air. The keepers, in their bright green coats and pants were so soft spoken and ready to talk at length about their lumbering charges. I heard more than one say the elephants were just like human babies and they were like their mothers. They feed them a special formula from giant bottles every three hours. And it amazed me to find out that their caretakers sleep in the huts with the elephants in bunk beds to keep them company. Some of them have been doing this for as many as 12 years. 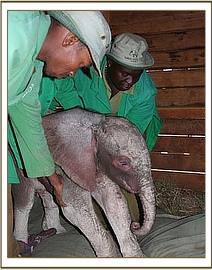 I adopted a 10-month old girl named Mutara for the Penn Museum. Mutara was orphaned by poachers in Laikipia shortly after being born. I chose her mainly because Kathleen’s research is based in Laikipia and I wanted to adopt an elephant that was orphaned by poachers. Some of the elephants there were victims of the horrible drought that’s been ravaging Kenya for the past two years.

Mutara was found with her umbilical cord still attached so it’s not likely that she was able to take her mother’s colostrum milk to boost her immunity. She was fed a special plasma formula to supplement for this at the orphanage.

Despite this devastating story, Mutara is extremely affectionate and in good health. She is treated like a queen at the orphanage and her new adopted family of humans and elephants are just as affectionate with her as she is with them.

The white stuff smeared all over her skin in the photo is sunscreen. Normally she would be shaded by her mother.

Mutara’s keeper, who sleeps in a bunk bed in her hut to feed her from an oversized bottle every three hours, says she is a “most playful girl.” He said I picked a good one. Even though they were all precious and heartbreakingly adorable, wrestling and writhing in the mud pit and making all kinds of noises only excusable when coming from babies.

The elephant population in Africa is not known exactly, but it is estimated that the population has decreased from some 3 million 30 years ago to only 272,000 today, according to figures provided by WWF and the World Conservation Monitoring Centre. Armed poachers still kill elephants for ivory and there is a renewed demand for elephant hide in Japan and potentially in Europe. The abduction of baby elephants into the live animal trade has also increased over the past two years.

Since 1977, The Sheldrick Wildlife Trust has saved 80 orphaned elephants.

Kathleen has visited this orphanage during previous excavation seasons, not only to visit with the adorable baby elephants, but to get a better understanding the current state of wildlife conservation. This is key to conducting research in Kenya, because, it seems that archaeology doesn’t happen in a vacuum.

This adoption program funds the rescue and care for all the animals at the shelter including an adolescent rhino named Maalim that will soon be released into the wild. It’s much like the (get ready for a shameless plug) Adopt and Artifact Program at the Penn Museum! Although, our keepers might disagree, our objects aren’t as cute as the elephants.

Unfortunately Kathleen and Jenn may have eaten something questionable and they are making useof our cipro scripts now back at the Kenya Club. Neither of them are in good enough shape to join us for the 6 hour drive to Mpala today. We suspect the culprit may have been the chips. Bill and I got the side of ugali, mashed maize instead. I now order it whenever possible.

Hopefully they will feel well enough to make the trip tomorrow. Being sick is one thing, but being sick in a hotel in another country is another.