Found together in a bin of plaster covered mudbrick during excavations in 1972, these intertwined skeletons date to the destruction of Hasanlu (ca. 800 BCE). The evocative position in which they were found has led to speculation about their identities and relationship to each other. The two are close together facing each other. The skeleton on the left (SK 336) appears to be reaching out its right hand to touch the face of the skeleton on the right (SK 335). They both have their arms around each other. Curiously, there were no objects found with these individuals with the exception of a stone slab in the bin that is under their heads. Both skeletons have evidence of trauma on their bodies sustained at or around the time of their death.

This archaeological discovery captures a snapshot of a tender and very human moment between these two people. Studying the remains may help to clarify details about both the biological sexes of these individuals and, perhaps, if they were related to one another.

Previously on display at the Penn Museum from the mid-1970s until the mid-1980s, the sexes of the two skeletons have been the subject of much debate. One is clearly male, while the sex of the other is less definitive, although it leans male.

How the two came to be in the bin is unknown, but perhaps they were hiding there as a place of refuge during the final sacking of Hasanlu. They along with the other individuals at the site represent poignant tales of the darker side of human behavior: destruction, warfare, and interpersonal violence.

The Hasanlu skeletal material is the subject of many research questions. Dozens of scholars and students from all over the world come to the Penn Museum to study the collection. 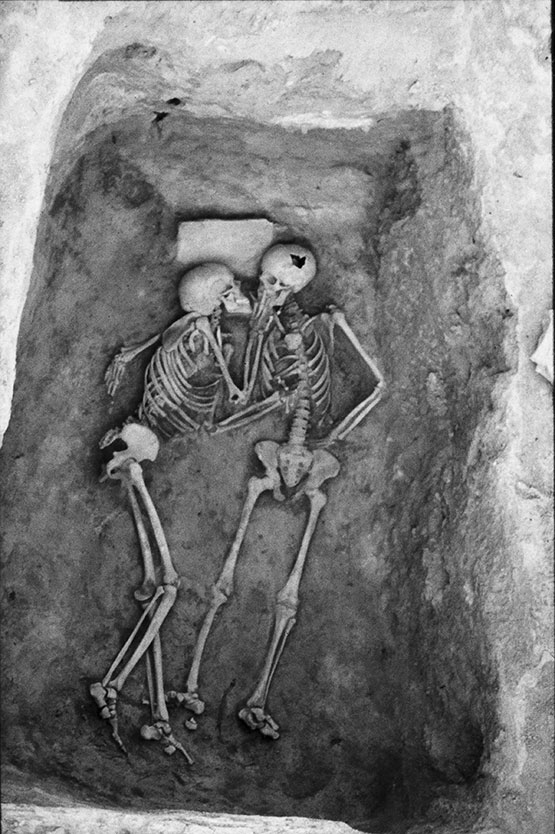 The site of Hasanlu was extensively excavated from 1957–77 as part of a general investigation into the archaeology of the Ushnu-Solduz Valley in northwestern Iran, a joint venture of the Penn Museum, the Metropolitan Museum of Art of New York City, and the Archaeological Service of Iran. The site has deposits dating back some 8,000 years to Neolithic times, however, the Iron Age levels, beginning around 1250 BCE, are the best understood.

The settlement portion of Hasanlu was dramatically destroyed (ca. 800 BCE) leaving a burned and body-strewn destruction level. Because there was no writing recovered from Hasanlu, it is termed protohistoric and the identity of its inhabitants remains a mystery. This makes the study of the human remains from the site all the more important, as the physical bodies recovered from the destruction level and cemetery at the site represent one connection we have to the people of the protohistoric period in northwestern Iran. 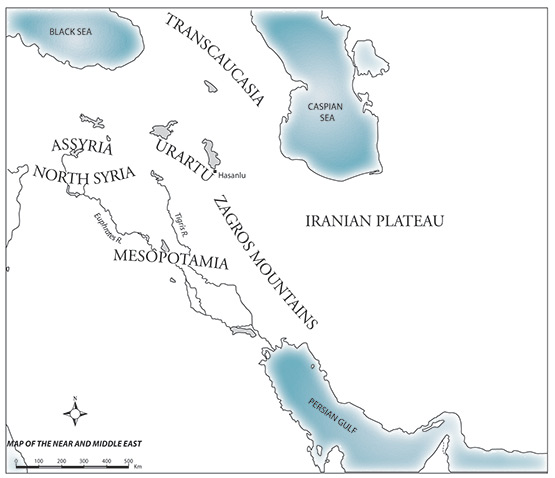 Context and Archaeology of Hasanlu

The ancient mound called Hasanlu is renowned as one of the largest and most thoroughly excavated archaeological sites in northwestern Iran. The site is located in the Solduz part of the fertile Ushnu-Solduz Valley which is drained by the Qadar River in the Iranian province of West Azerbaijan. Hasanlu lies southwest of Lake Urmia, a sizeable salt lake, and is the largest and best known of a group of archaeological sites in the valley. Hasanlu is a mound or tepe that built up over time as a result of a long human occupation of the site. It consists of two distinct topographic zones. The central area or High Mound, is 25 meters tall and 200 meters across. It is surrounded by the 8-meter-tall Low Mound, which includes a cemetery. As mapped, Hasanlu spans some 600 meters edge-to-edge; however, part of the site is covered by modern village occupation so the actual size of the settlement is not known. The Urmia basin is located along major trade and transportation routes suggesting contact with Mesopotamia, Anatolia, the Caucasus, and the Iranian Plateau.

At the end of Period IVB (ca. 800 BCE), Hasanlu was violently and completely destroyed by fire. The conflagration is thought to have happened in late summer based on plant remains. The people who remained in the buildings on the High Mound, including women and children, were completely wiped out by violence and fire. Most seem to have been left where they were killed in the streets and in buildings, which then collapsed on their bodies because of the fire. The people who remained at Hasanlu did have weapons and horses at their disposal. Large collections of various types of weapons were found in several of the buildings, possibly in storage areas. However, the bodies strewn all over the city indicate that the end was swift and violent.

Similarly, the military artifacts of Period IVB generally provide little to identify the attackers. Matching the date produced by radiocarbon evidence and artifact parallels with historical records, most scholars support the destruction of Hasanlu by the Urartians led by the kings Ishpuini (825–810) and/or his son Menua (810–781). This interpretation is also supported by rock inscriptions near Ushnu and Tashtepe in the Urmia region celebrating the military campaign of Ishpuini and Menua.

The main battle at Hasanlu is thought to have been fought by horse-mounted soldiers, including charioteers, on the plains surrounding the High Mound. The analysis of the Hasanlu skeletons is supportive of this scenario. While there were many more males than females in the destruction level group, the number of women and children present is not insignificant. Compared to historic battlefield assemblages, which have virtually no women or children, the bodies from Hasanlu fit more with prehistoric sites interpreted as warfare-related where women and children are common. Based on the sex and age distribution of the High Mound skeletons, it seems likely that the main battle was indeed fought by horse-mounted soldiers away from the settlement. Nevertheless, women and children remained on the High Mound with some form of male defensive presence. The victorious invaders, either in pursuit of the remains of the Hasanlu military or having defeated them, approached the High Mound settlement. The people still at Hasanlu were then slaughtered and the city set ablaze either on purpose or by accident. 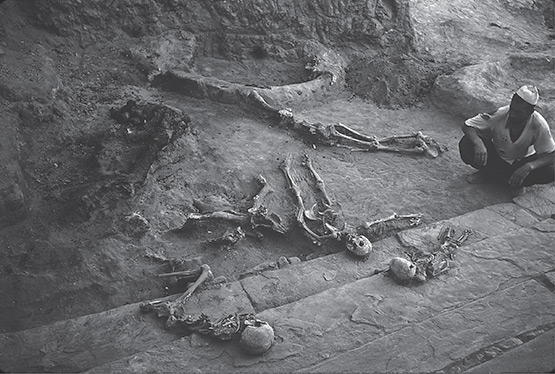 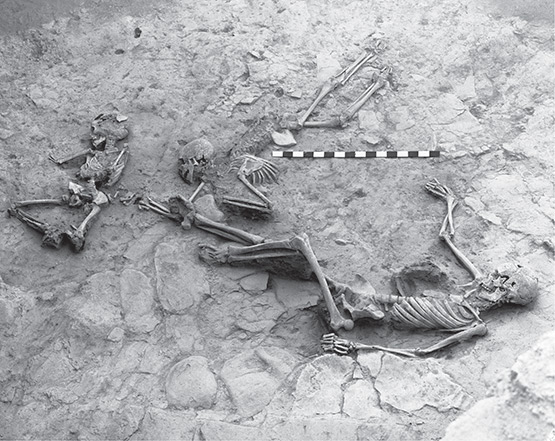 The primary focus of excavation at Hasanlu was Period IV (ca. 1250–ca.750 BCE, which is subdivided into three phases, IVC (ca. 1250–ca. 1100 BCE), IVB (ca. 1100–ca. 800 BCE), and IVA (ca. 800–ca. 750 BCE). The first phase is characterized by the construction of several large buildings on the High Mound. Hasanlu IVC terminates with damage from a large fire in the southeastern corner of the settlement that destroys some of these newly erected buildings. There is no indication of the fire being part of an attack on the site, as Period IVB begins without interruption. During this time, the damaged buildings are reconstructed and the High Mound undergoes much in the way of new construction. This, of course, ends abruptly with the massive destruction of the settlement at the end of Period IVB, (ca. 800 BCE).

Period IVA is primarily a time of abandonment at the site though there is some evidence of a limited “squatters’ occupation” and reuse of some building materials. The amount of charred grain on the High Mound indicates that it was being used mostly for cultivation rather than residences and that it was wiped out by fire as well.

Evidence for continuity between the preceding Period V and Period IV includes continued use of the cemetery for burial of the dead, building practices and architectural style, and the same pottery wares though with changes in form. Hasanlu was not a fortified city during Period IV, making it easy for attackers to breech the lightly built perimeter wall. Hasanlu during Period IVB is characterized as powerful and prosperous with monumental architecture, paved streets with drainage systems, and evidence of extensive trade networks. The structures on the High Mound had at least two stories (based on the layering of finds and the amount of mudbrick present in the collapse).

Northwestern Iran is located in an area that was of geopolitical interest to the empires of both Assyria and Urartu, yet it never reached their level of influence or sophistication. The region is crossed by trade routes from Assyria and the Caucasus through to central Iran. The regional economy was based on agriculture and animal husbandry. Many goods were produced locally but additional luxury items were imported.

In general, the picture of Hasanlu at the end of the 9th century BCE is one of cosmopolitan prosperity. A mix of influences is apparent in the material culture of the site. The most notable example of this is the famous yet enigmatic Gold Bowl found in Burned Building I with the remains of three men, two of whom were armed. None of the artifacts found with the three men help to identify them either as locals or as invaders. The Gold Bowl with its mystery, majesty, and multiplicity is an appropriate icon for Hasanlu Period IV, a thriving Iron Age center at the crossroads of empires.