Penn Museum researcher Dr. Patrick McGovern, Scientific Director of the Biomolecular Archaeology Project for Cuisine, Fermented Beverages and Health, has once again pushed back the beginnings of viticulture and winemaking in the Middle East—to around 6000 BCE. Together with an international, multi-disciplinary team of archaeologists and scientists, he carried out chemical analyses of jars from early Neolithic sites in the Republic of Georgia in the mountainous region of the South Caucasus. This finding is 600-1000 years earlier than the previous earliest chemically confirmed wine jars from Hajji Firuz Tepe in Iran in the Museum’s Near Eastern collection.

Dr. McGovern, who has made a career of finding, analyzing, and interpreting evidence of the important role of alcohol in the history of humankind, was lead author of a new report on this discovery, published in The Proceedings of the National Academy of Sciences USA, November 13, 2017.

The discovery has been widely reported in the international media. Please see a sampling of articles below. 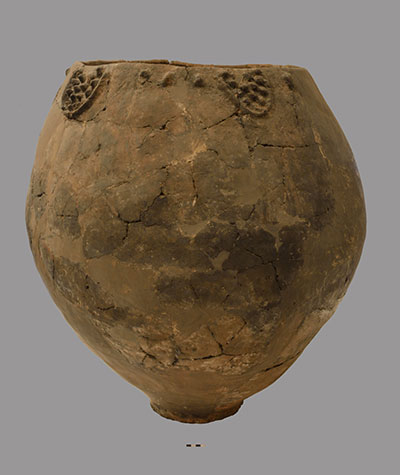 Representative early Neolithic jar, circa 6000-5000 BCE, from Khramis Didi-Gora This specimen is nearly a meter tall and a meter broad, with a volume exceeding 300 L. (Photograph by Mindia Jalabadze and courtesy of the National Museum of Georgia.)

Wine from Prehistoric Georgia with an 8,000-Year-Old Vintage
The New York Times
November 13, 2017