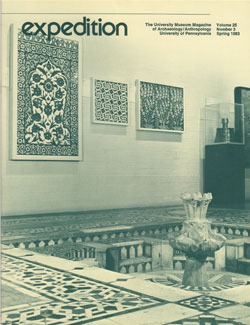 On the cover: The Islamic Gallery in the Museum.
Photo by Michael Wakely.

Women in Shari'a (Islamic) Law in the Sudan

Perhaps no other topic in Islamic law has drawn such attention in the West as that of the purported low status of women. The Muslim woman is stereotyped as docile, passive and subjugated by both men and Islamic institutions. A number of negative stereotypes held in the West center around misleading notions regarding the status […]

The Return of The University Museum Demeter

A Greek Goddess Attempts to Establish Her Identity

For more than forty years a graceful marble statuette of a Greek goddess (Figs. 1-3) stood unnoticed in a storage room of The University Museum. Eventually, as time passed, its history, records, even its very existence were forgotten. Suddenly in 1979 the petite goddess appeared in public once again in an exhibition of ancient Greek […]

A New Plan and Description of the Early Iron Age Settlement

Richard Seager originally identified the early Iron Age settlement of Vrokastro, on a limestone spur (Fig. 1) just south of the main east-west coastal road between the harbor town of Aghios Nikolaos, to the west, and the village of Pachyammos (“deep sand”) east of the site, near the narrow isthmus of Hierapetra (Fig. 2). Immediately […]

A Possible Example at Ixtutz, Guatemala

The low lying areas of the Southern Maya Lowlands of Mexico, Guatemala, and Belize were at one time crisscrossed with extensive agricultural field systems. Much recent work in the Maya area has focused upon these newly discovered agricultural features and their implications for Maya civilization (Harrison and Turner 1978; Flannery 1982). It would appear that […]