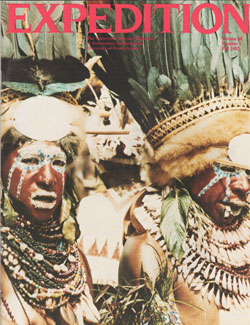 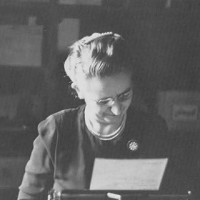 An Appreciation by Past and Present Expedition Staff

By: Erle Leichty and James Muhly and Barbara Murray and Martha Phillips and Jennifer Quick and Bernard Wailes

Geraldine Bruckner, aged eighty-two and Expedition’s Associate Editor, died on 9 August 1983 after a short illness. It would be fair to say that The University Museum has lost an institution, as Geraldine had worked here continuously since 1921 and was a living respository of Museum history and lore. It was particularly appropriate that Geraldine […] 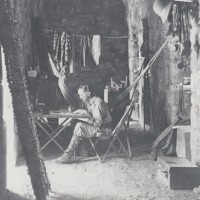 A century ago the splendid ruins of Maya civilization, first made famous by the travel accounts of John Lloyd Stephens and the illus­trations of Frederick Catherwood published nearly fifty years previously, were the subjects of much speculation but little scientific knowledge. Today all that has changed due to the efforts of scholars in archaeology, linguis­tics, […] 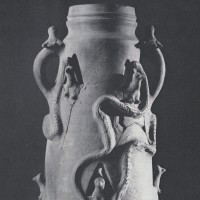 Cylindrical stands for pottery were used by several ancient cultures in the eastern Mediter­ranean, but their development among the Minoan of Bronze Age Crete was especially elaborate and interesting. By the latter part of the Late Bronze Age, Minoan stands were ornamented with snakes, horns, birds, multiple handles, and other attributes, going well beyond the […]

The University Museum has tried over the years to encourage an awareness of the richness and diversity of human culture, both past and present, through its displayed collections and through continued research and publication. With the centennial of the Museum rapidly approaching—it was founded in 1887-a booklet was produced to accom­pany a display of Museum materials […]

The highland regions of Papua New Guinea were virtually unknown to outsiders until explorations during the 1930s revealed that hundreds of thousands of people were living there, speaking hundreds of languages, and subsisting largely by growing the sweet potato, which thrives at both low and high elevations. While trade objects from the coasts, even iron […]

A View of the History of an Etruscan City-State

In The University Museum is a collection of architectural fragments from the Etruscan city-state of Tarquinia (Fig. 2), perhaps best known for the wall paintings of its archaic and classical tombs. The fragments in the Museum are part of a whole series of terracotta plaques that covered and decorated the exposed wooden beams of the […]