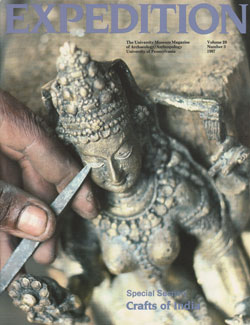 On the cover: The finishing touches are made to a statue produced by the traditional lost wax process in a casting workshop in Chamba, India.
Photo by Terry J. Reedy

Northwest India is renowned among art historians for the Buddhist and Hindu copper alloy statues produced there during the medieval period (7th through 15th centuries). The iconography of these statues is often complex, and the craftsmanship superb. One typical example is illustrated here (Fig. 1). This image represents the four-armed form of the Hindu god […]

We Stood on a hillside surveying the landscape for just the “right spot”. M. Palaniappan preferred the low, more level area near the base of the hill, while Jhithru Ram favored the sloping crest. Three others of us stood by observing as they spoke animatedly in Hindi. The day, a steamy one in early June,marked […] 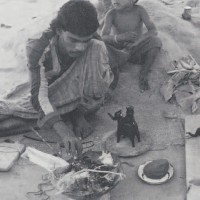 The following description briefly outlines the stages of dhokra brass-casting as carried out by Dariapuri artisans today. Variations in materials and minor points of technique appear in other parts of the region, but the basic steps remain the same. First a clay core is modeled to rough out the object. The core is smoothly finished […]

The Brasscasters of Dariapur, West Bengal

Artisans in a Changing World

In the spring of 1988, Sri Haradhan Karmakar (Figs. 1,2), a brasscaster from West Bengal, came to Philadelphia to participate in the Festival of India exhibit, Mahamaya, at the Port of History Museum. During his stay, he came twice to cast his molds in the courtyard of The University Museum as a demonstrator for the […]

A Special Section on the Study of Crafts in India

Observing a skilled artisan at work brings to the viewer an understanding that is bath aesthetic and intellectual, and that is absorbed through avenues other than words. It is the way apprentices around the world have traditionally learned their crafts. For scholars, the study of material culture is enhanced enormously by direct observation. It can […]

Egyptians and Libyans in the New Kingdom

For Classical authors such as Herodotus (ca. 450 B.C.), all the various independent people inhabiting the huge land mass extending west from Egypt to the Atlantic Ocean were called “Libyans.” For convenience, we can also employ this general term for the Bronze Age inhabitants of the area. The Egyptians of the New Kingdom (1500-1050 B.C.), […] 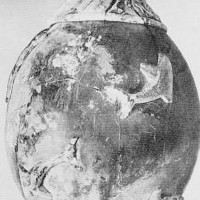 The exotic and easily recognized ostrich egg is found surprisingly often by archaeologists working all around the Mediterranean. Evidence for its use is found as early as the 7th millennium B.C. While it yields large amounts of protein and is thus best known as a dietary supplement, it has many other uses, and is therefore […]

On Ostrich Eggs and Libyans

Traces of a Bronze Age People from Bates' Island, Egypt

(The Libyans] schemed to plot rebellion a second time, to finish their lifetime on the frontier of Egypt. They gathered the hill-countries and plains of their district. They laid death upon themselves [by coming] against Egypt… (Records of Ramesses III, translated by Edgerton and Wilson 1936:91) Introduction During the Mediterranean Bronze Age (ca. 2000 to […]

Traditional Navigation in the Western Pacific

A Search for a Pattern

Do people learn and mentally organize their experience in similar ways in spite of differences in their cultures and in the content of what they have to learn? Or is there a primitive mentality essentially different from a civilized one? We know that all people, if raised in the appropriate environment, prove capable of learning […]