The 'Pagoda' Table from Tumulus MM at Gordion

The University Museum excavations at Gordion in central Turkey were begun in 1950 under the direction of Rodney S. Young, Professor of Archaeology at the University of Pennsylvania and Curator of the Mediterranean Section of the Univer­sity Museum. Gordion was the capital of the ancient Phrygian empire, ruled at the height of its power by […] 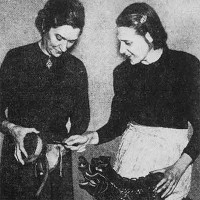 Its History, Aims, and Accomplishments

Introduction With the Centennial of the University Museum approaching, various projects on its history are under way, and some may appear from time to time in Expedition: this article is one such. Although outside the normal range of our articles, it is not however as far removed from scholarly work as might appear at first […]

A Look at Their Western Connections

The Yün-kang caves belong to a string of early Buddhist cave temples that stretches across northern China from Kansu in the far west to Manchuria in the east (Fig. 1). The caves lie above the Wu-chou River, about 15 km. west of the modern industrial city of Ta-t’ung, in the north of Shansi province, and […]

Women in Shari'a (Islamic) Law in the Sudan

Perhaps no other topic in Islamic law has drawn such attention in the West as that of the purported low status of women. The Muslim woman is stereotyped as docile, passive and subjugated by both men and Islamic institutions. A number of negative stereotypes held in the West center around misleading notions regarding the status […]

The Return of The University Museum Demeter

A Greek Goddess Attempts to Establish Her Identity

For more than forty years a graceful marble statuette of a Greek goddess (Figs. 1-3) stood unnoticed in a storage room of The University Museum. Eventually, as time passed, its history, records, even its very existence were forgotten. Suddenly in 1979 the petite goddess appeared in public once again in an exhibition of ancient Greek […]

A New Plan and Description of the Early Iron Age Settlement

Richard Seager originally identified the early Iron Age settlement of Vrokastro, on a limestone spur (Fig. 1) just south of the main east-west coastal road between the harbor town of Aghios Nikolaos, to the west, and the village of Pachyammos (“deep sand”) east of the site, near the narrow isthmus of Hierapetra (Fig. 2). Immediately […]

A Possible Example at Ixtutz, Guatemala

The low lying areas of the Southern Maya Lowlands of Mexico, Guatemala, and Belize were at one time crisscrossed with extensive agricultural field systems. Much recent work in the Maya area has focused upon these newly discovered agricultural features and their implications for Maya civilization (Harrison and Turner 1978; Flannery 1982). It would appear that […]

The many volunteers who participate in the wide range of activities of the Univer­sity Museum form an indispensable resource in carrying out the Museum’s dual mission of research and public education. Their tasks have included working in store­rooms, archives, installations, computeriz­ing the inventory, typing, filing, drawing, stringing beads, reorganizing collections, guiding visitors, and visiting schools […]

The regular reader of Expedition and, almost certainly, every professional archae­ologist has at one time or another experi­enced the spell cast over the imagination by the ancient settlement mounds of early floodplain civilizations. Once teeming with thousands, they now lie dry and bare under a relentless sun. The Asian alluvium, of course, comes foremost to […]