The Origins of Pastoralism in Eastern Africa: Archaeological Exploration on the Laikpia

By: Kathleen Ryan and Karega-Münene

How do cattle herders such as the pastoral Maasai of East Africa, manage to survive and often prosper in harsh and unpredictable environments? Can their survival strategies provide analogies for prehistoric pastoralists who lived in similar environments? These questions were posed by one of us, Kathleen Ryan, in 1990, during her first ethnoarchaeological study in […]

Two Questions that might be asked about the Penn Museum are: Why should we have a major public focus on exhibits, education, and out­reach? And why should people from Philadelphia and from the U.S. Northeast visit us? The answers rest upon the Museum’s mission, which exists on several levels. Our basic mission, like that of […]

This Winter’s Expedition is a special issue on Caves! Spanning the globe from Mesoamerica to Borneo and ranging in time from the Paleolithic in Europe to Australia’s modern Aboriginal peoples, six feature articles present recent archaeological and anthropological research undertaken in caves and rock shelters. We begin near the top of the Old World, in […]

Caves have been used as sacred spaces for thousands of years throughout the world. Nowhere is this better illustrated than in Mesoamerica, where ethnography, ethnohistory, iconography, epigraphy, and archaeology have all contributed to our understanding of the meanings of these spaces for pre-Columbian societies. Although cave use was noted as early as the 1840s—during Stevens […]

What Did Ice Age People Do in the Deep Caves?

In our modern Western world, deep caves have lost their supernatural aura, now serving primarily as areas for sport and study for exploratory spelunkers. In the past and in other parts of the world, however, people have often been awed by caves. The Inka believed caves to be respected places of emergence or origin, while […]

One of the largest and most varied prehistoric cemeteries in Southeast Asia was discovered in the late 1950s in the West Mouth of Niah Great Cave in Sarawak, Malaysia, on the north side of the island of Borneo. After organizing resistance against the Japanese occupiers during World War II, Tom Harrisson became the Director of Sarawak […]

Caves as Sacred Places on the Tibetan Plateau

Although most of us think of Tibet as a high plateau riven by high mountain chains wide open to the skies, it has a deep, hidden, and underground dimension as well—numerous caves with extensive dark zones. Much of the plateau near Lhasa has a limestone geology, ca where natural processes create caverns and rock shelters. […]

A Ritual Vessel in a Maya Cave: Chocolate-Loving Monkeys and Humans 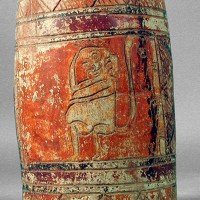 Caves in the Alta Verapaz region of Guatemala were frequently used for rituals and burials by the ancient Maya. This cylindrical vessel comes from a cave near the village of Senahú, where it was collected by Robert Burkitt during the early 20th century. Although Burkitt called it a burial cave, his usually meticulous notes do not reveal […]

Mystery at Acámbaro, Mexico: Did Dinosaurs Coexist with Humans?

Begining in 1950 stories of a large collection of strange ancient figurines surfaced in the American and Mexican press. Waldemar Julsrud, a German shopkeeper living in Acámbaro, Guanajuato, Mexico, had purchased from local excavators more than 33,000 clay figurines made by a previously unknown culture. Most astonishing, however, was that the figurines included representations of dinosaurs eating humans, […]