Textiles from the Silk Road 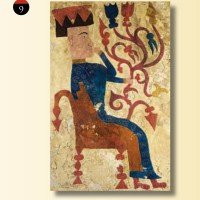 Silk was one of the most luxurious commodities traded along the many routes of the Silk Road. But one should not assume that only silks were traded, or that silks were the most important of all exchanged goods. Since the late 19th century, archaeologists have unearthed textile fragments made of other fibers such as wool, […]