Bulls and Bull-leaping in the Minoan World 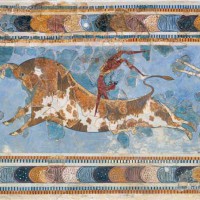 In cretan culture, the bull is everywhere. Horns of consecration adorned the top of Minoan shrines and may have decorated palaces at Knossos, Mallia, and Phaistos. Great ceremonial axes of bronze, perhaps suggesting the sacrificial slaughter of bulls, were recovered from palatial contexts. Objects such as the Hagia Triada sarcophagus, dated to the early 14th century BC, show cattle trussed in preparation […]