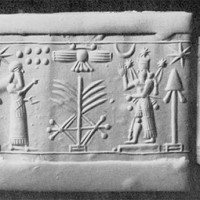 While ancient cylinder seals have been studied and reported in great detail, especially as to their iconography, there have been relatively few reports on their method of manufacture. There are none dealing with the microscopic examination of seals. Here we shall describe such a study using the scanning electron microscope (SEM). Cylinder seals (Fig. 1) […]

In the chronology of the development of ancient stone tools, drills and drilling were late additions to paleolithic technology. They had been preceded by other shaped liths and other uses such as scrapers and burins for hundreds of thousands of years. Subsequently, all ancient peoples learned the craft of drilling. Changes and improve­ments, however, took […]

To many, a puzzling mystery of the ancient world is how minute artifacts or parts of them were made without magni­fication. Dramatic examples of this include small engraved Greek and Roman gems (Fig. la, b), coins with tiny engraved letters (Fig. 2a, b), the small intricate carving on certain ancient Near Eastern cylinder seals (Fig. […]

The Ancient Craft and Art of the Lapidary

This present issue of Expedition, like the previous one, is a special number devoted to the subject of the ancient lapidary. Together, they constitute the first time that the subject has been dealt with as a unified theme, from the work of Paleolithic Man, through that of the cunning craftsmen who made the first cylinder […] 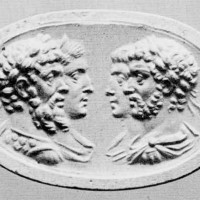 Discussion of suggestions from readers of Expedition

One of the purposes of our paper in the Winter 1981 issue of Expedition called “Close Work Without Magnifying Lenses?” was to present a hypothetical explanation for the ability of ancient craftsmen to effect minute detail before the invention of magnifying lenses. We presented evidence from the scientific disciplines of optics, opthamology, medical genetics, population […]

The Origin and Development of the Ancient Near Eastern Cylinder Seal

One purpose of this paper is to discuss and speculate on the origin and develop­ment of one of the most unusual and impor­tant lapidary artifacts in mankind’s history, the cylinder seals of the ancient Near East. They were part of the burst of creative energy and invention that accompanied urbanization in Mesopotamia around 3300 B.C. […]