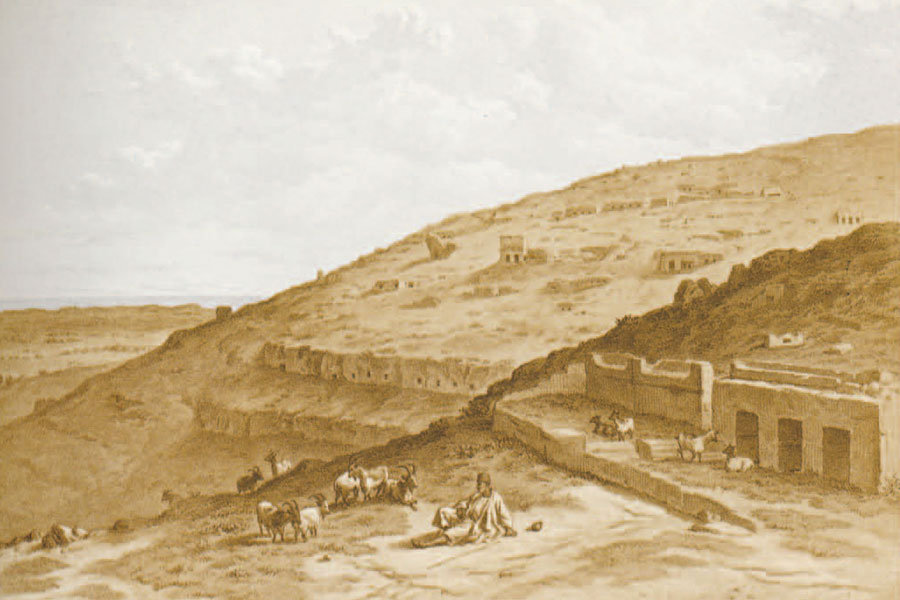 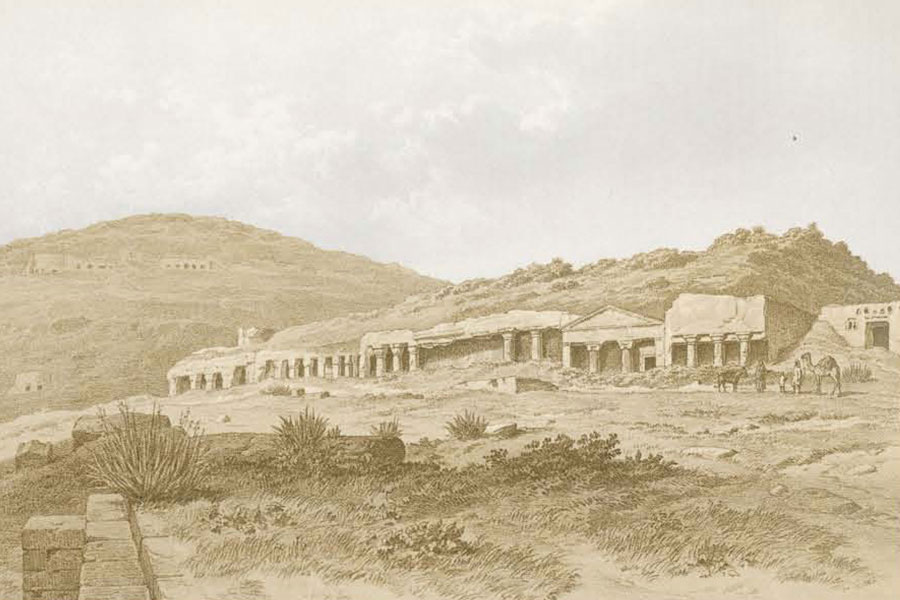 In some, the facade is cut out like the front of a small temple with columns, architraves, pediment, etc. nearly all of which are of the Doric order. 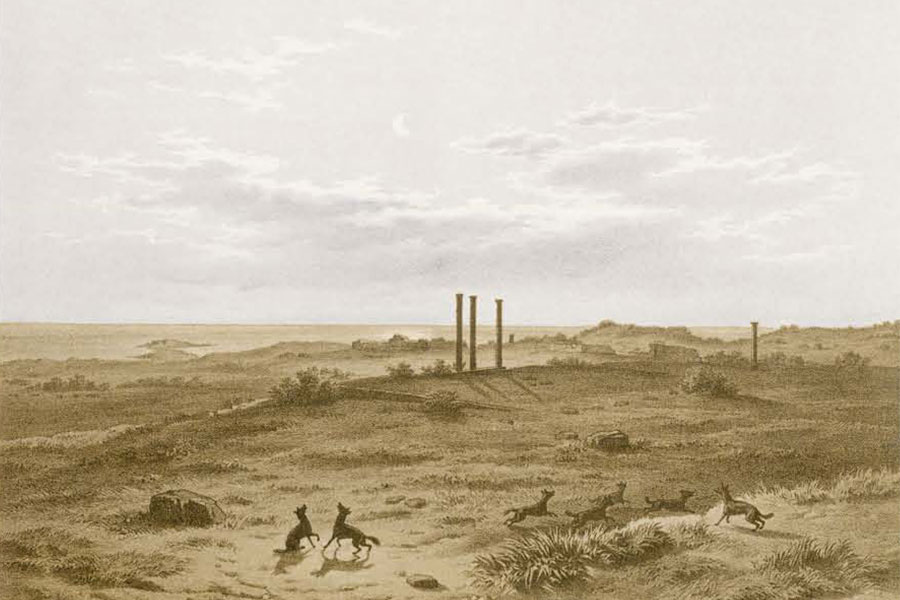 Close by the entrance to the reservoirs of the city of Ptolemeta stand three Ionic columns, the most conspicuous objects among the ruins of the city 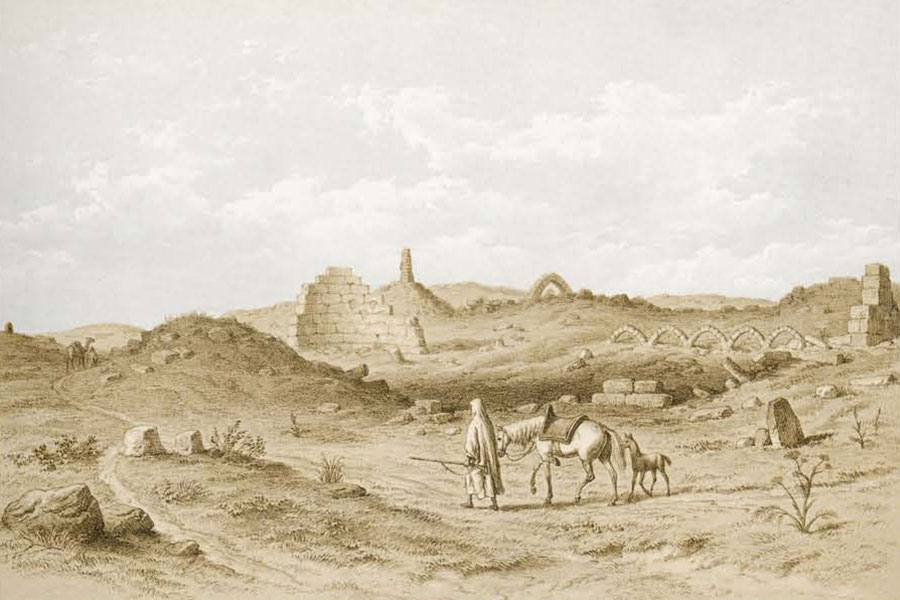 On the southeastern side fo the city, around the head of the valley, the ground is covered with . . . the remains of the Christian City of Cyrene. 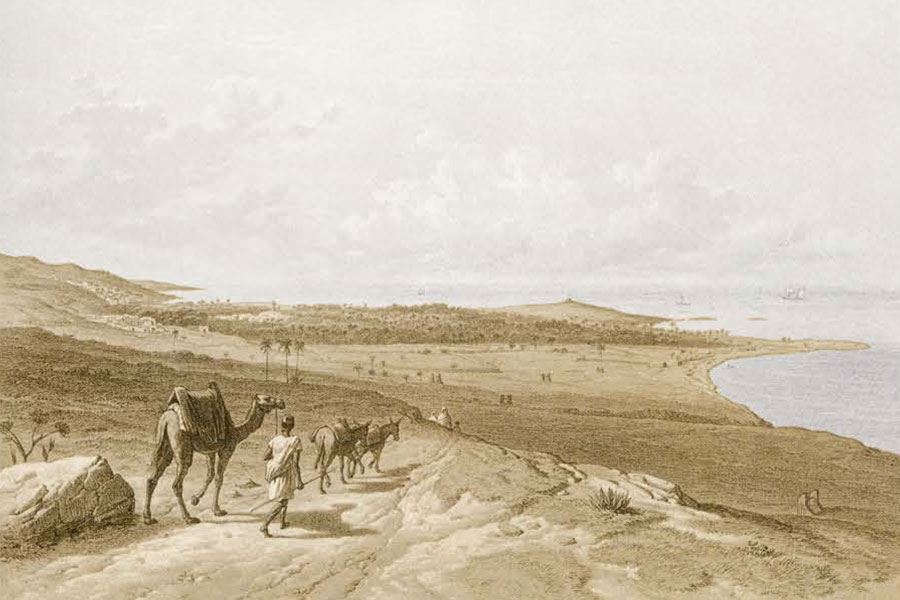 The neighbouring hills are perfectly bare so that the town with its luxuriant date-gardens forms quite an oasis in the stony desert around.

“The parts of Libya about Cyrene,” as the King James version of the Acts of the Apostles styles it, at that time constituted a magnificent Greek colony of five cities. Cyrene has never been a popular travel Mecca. Lemaire, the French consul in Tripoli, visited the province in 1706. Another French traveler took the overland journey form Egypt to Cyrene in 1760. Others went, attached to punitive expeditions sent out b y the Turkish Pasha, Governor of Tripoli. The area was first correctly charted by Captain Beechey and his brother in 1821-22. A French consular agent at Benghazi, M. de Bourville, was the first to collect, in 1849, vases and terracottas now in the Louvre.

In 1862-63, Captain R. Murdoch Smith, R.E. and Commander E.A. Porcher, R.N. became the first Europeans to conduct excavations in the province and to publish them, History of the Recent Discoveries at Cyrene Made During an Expedition to the Cyrenaica in 1860-61 under the Auspices of Her Majesty’s Government, (London 1864), with sixty plates, sixteen photographs, and ten Greek inscriptions lithographed in facsimile from impressions of the originals. Assisted in the undertaking by the British Museum and the Admiralty, the first archaeological expedition to Cyrenaica set out over one hundred years ago, in November of 1860.

A list of the provisions used on this project is included since, with certain additions, it reads very much like the inventory of supplies used in the Museum’s reconnaissance in Cyrenaica in 1962.

Materials, etc– Two double circular tents complete with storm guys and pegs; two small portable wooden trestle bedsteads, made to roll up and be carried in waterproof bads; two field-hospital cork mattresses (rolling up), two pillows, four blankets, and two rugs, all carried in two waterproof bags; two iron folding chairs; cooking apparatus, consisting of a large saucepan, a kettle, a gridiron, and tea and coffee pots; a few knives, forks, and spoons, and some tin dishes, plates, and cups; a lantern (talc), and a large supply of candles and lucifer matches; a few simple medicines, some lint, sticking plaster, an axe, two small hatchets, two saws, six spades and pickaxes, a crowbar, a coil of 1 1/2 inch rope, a ball of whipcord, a hammer, and some nails.

Provisions–Two bags of ship’s biscuits, a bag of rice, a large supply of tea, coffee, sugar, and salt, packed in tin boxes; two dozen tins of preserved meats to be used on emergencies only; two small cheeses; some spices, such as mustard, pepper, and curry-powder, two dozen of brandy.

Besides the above–Guns and revolvers, and a good stock of ammunition; English saddles, bridles, etc.; personal luggage, such as clothes, books, instruments, etc., as little as possible.

The party arrived at Benghazi, making it their base of operations. Smith describes the town: “The streets and houses are wretched in the extreme…No account of (it) would be complete without mentioning the plague of flies…” Benghazi has not changed in terms of flies although a hundred years have twice tripled its size and oil has boomed its economy. Two weeks of caravan travel saw them to their destination, Cyrene. Here for six months with a corps of four workmen, Smith and Porcher conducted their researches. They felt the most striking remains of the city were the cemeteries hewn out of solid rock. Smith directed the work. Porcher measured, drew, sketched plans.

They report little of the city remained visible. Could they return today they would find the city unearthed by Italian and British spades to reveal the monumental forum, baths, acropolis, theater, whose splendor and panoramic complexity dwarf the cemeteries that rise above. Describing excavation techniques, Smith remarks that although it may seem a very simple matter to teach an able-bodied man to use a pick-axe and a shovel, it is a much more tedious process than may be supposed.

During their seven month stay, they made several excursions to different places in Cyrenaica. In February, 1861, the party made an excursion to Derna and in April to Ptolemais.

At Cyrene, their digging among the tombs was amplified to investigations amid the ruins of the visible temples. The record of their stay is impressive. Temples were cleared, tombs were investigated and drawn, and numerous Greek and Roman sculptures were taken back to the British Museum where they may be seen today.

The drawings made by Commander Porcher in the field were lithographed by T. Picken and published by Day and Son, lithographers to the Queen. Their charm lies in the romance of ruins set in the alluring Arab setting captured with delicate and telling realism. They are valuable documents of “the parts of Libya about Cyrene” before the great continuing archaeological excavations, restorations, and reconstructions of the last hundred years.