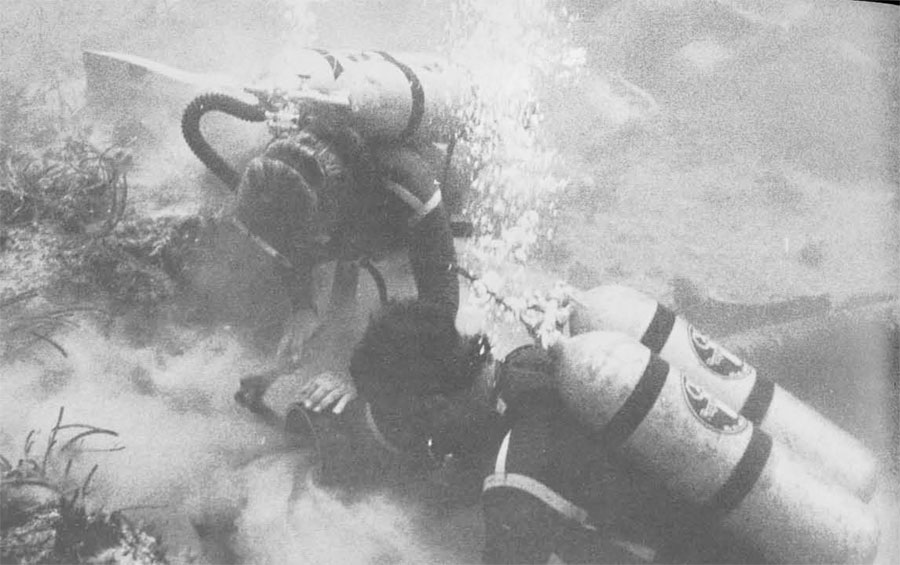 Using the suction of the air lift, divers are removing the thick matting of grass and sand which buried most of the wreck. 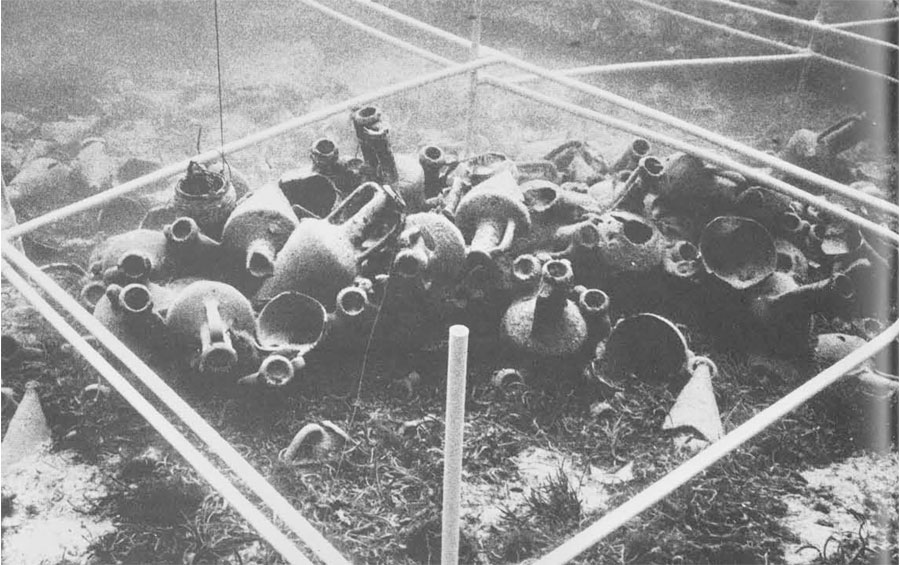 A grid of plastic irrigation pipe was set over the wreck so that objects could be accurately plotted. 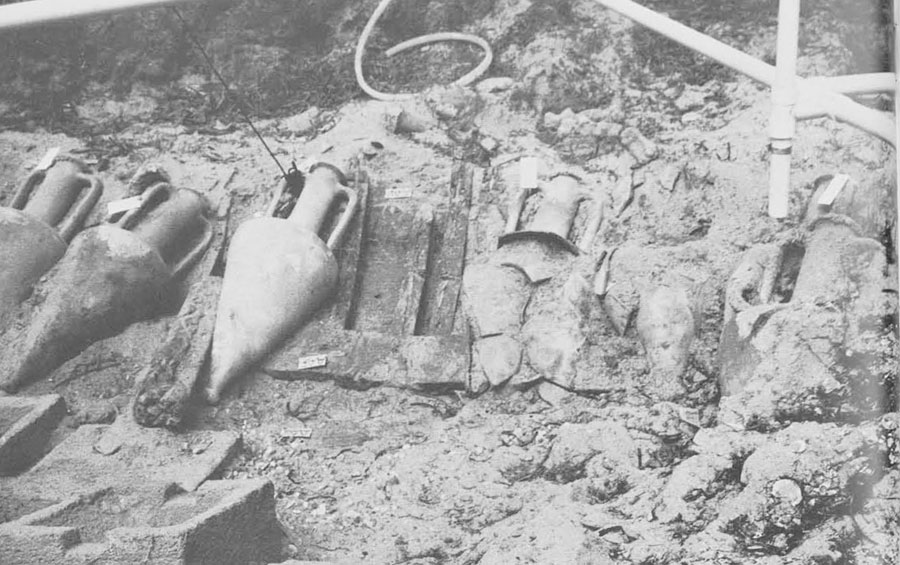 A view of the ship’s hull over which a row of amphoras is stacked. In the foreground are some of the grain mills.

The University Museum’s excavation of the Kyrenia shipwreck in 1968 was carried out with the kind permission of the Depart­ment of Antiquities of the Republic of Cyprus and through the additional sponsorship of the National Geographic Society, the National Endowment for the Humanities, the John Brown Cook Foundation, Cyprus Mines Cor­poration, the Ford Foundation, the Dietrich Foundation, and the Houghton-Carpenter Foundation. The director wishes to thank Dr. George F. Bass, director of the Museum’s Underwater Section, under whose patient counsel he and several student members of the expedition learned the techniques of un­dersea excavation.

A Greek merchant ship lies wrecked off the north coast of Cyprus. It was revealed to mem­bers of the University Museum in the autumn of 1967 by its discoverer, Mr. Andreas Cariolou. Less than a mile northeast of Kyrenia this an­cient trader had gone to the bottom, 90 feet below, with all her cargo. Here she had lain un­disturbed for over 2200 years until a team of diving archaeologists began the careful uncover­ing of her cargo in the spring of 1968.

From their survey of the site in the pre­vious autumn, the excavators knew that they would be dealing with a cargo of as many as 500 amphoras. Beneath were areas of metal widely spread over the wreck site, which extends some nineteen meters in length and ten meters wide. It was hoped that enough of the wood of the hull would remain buried in sand to permit a reconstruction of the ship’s design. However, the ancient trader was to hold some surprises.

The first problem faced by the excavators was how to remove the deep overburden of sand that covered more than four-fifths of the ship’s cargo. The task was made more difficult by a matting of eel grass roots, often as much as 30 cm. thick. We undermined this matting with a water jet and then inserted a needle bubbling compressed air just beneath the roots to loosen the sand that held them. This done, the over­burden of matting could be cut away in sections to expose the amphoras beneath. From now on, the excavation would proceed rapidly, using the familiar suction tool, the air lift.

What had appeared to our first divers as a miniature mound of 80 amphoras expanded day by day until, by the end of the season, more than 300 had been brought to the surface. Per­haps another 200 still lie in place awaiting ex­cavation. Ten different amphora shapes have been found. Most of them are Rhodian in origin and date to the final third of the 4th century B.C. But the nine other styles appear in relatively small numbers, and this suggests that they may have been picked up at several different ports of call.

Some of the Rhodian jars bear stamped im­pressions on their handles, possibly entered by an official at the pottery works to certify the ca­pacity of the amphora. Scratched on the shoulder of one jar is an enigmatic EY, perhaps the scrib­bling of a crew member or passenger on this last voyage. To our surprise, as we cleaned the amphoras we found several of them containing quantities of almonds still preserved in their shells. Most of the jars, however, carry no trace of their original contents. In addition, only one amphora lid, made of stone, came up during the first season, leading us to wonder whether some portion of the freight might have been simply emptied jars.

As the excavation penetrated deep into the mound of amphoras an unexpected cargo was revealed. At least 27 stones for hopper-type grain mills lay stacked in three rows along the axis of the ship. They extend over a distance of four meters. Two blocks make up each mill. Grain would be poured into the V-shaped bin of the upper block and fall through its narrow slot. A wooden bar was most likely secured in the cut­tings along the upper stone’s margin by a rope lashed to two vertical iron rings that are imbed­ded in each short side. Two men would then move the upper block over the lower, grinding the grain between the herringbone-patterned bottom of the upper block and the corrugated surface of the lower one. The blocks were cut from a dark volcanic stone of a type that most probably comes from one of the Cycladic islands, Thera or Melos.

Two separate ‘cabin areas,’ fore and aft, seem likely from the way in which the small finds are distributed, to date. In one such area three kantharoi, an echinus bowl, and other small vases were concentrated. Also, just adjacent, a set of lead net weights tells us where the sailors stored their fishing gear. A bronze coin, most probably minted in the lifetime of Alexander the Great, lay amid the weights. In the second `cabin area’ three echinus bowls, a black glazed pitcher, a ring-handled guttus and several larger coarse ware bowls were found. Another find here, bearing a personalized touch, was an unusually shaped ‘fish plate,’ with the graffito EY T scratched on its base. Almost five meters separate these two conjectured cabins.

Early in the season small fragments of thin lead sheets with bronze tacks were found scat­tered at every level of the excavation. Soon, larger sheets of lead with regular rows of tacks were uncovered, indicating that the merchant vessel bore a sheathing of lead attached to its outer hull as protection against marine life. Most of the sheathing to this date is fragmentary, owing to its having fallen from sections of the hull that were exposed to decomposition above the sand bed. However, the final days of excava­tion uncovered sections of sheathing still attach­ed to the outer planking. In addition,two rolls of lead were removed this season, on board to be used as patching material when the original cov­ering was damaged or worn. This technique of sheathing a boat with lead is well known to us in Roman times, but the Kyrenia ship now stands as the earliest example of the method yet found.

The most gratifying aspect of the excava­tion season was our first glimpse of the ship’s hull. Wood began to reveal itself in an excellent state of preservation, with the amphora cargo neatly stacked within it. Along one edge of the ship, outer planking is still joined to the ribs by bronze nails clenched over on the inner face of the ribs. Also an inner lining of ‘ceiling plank­ing,’ which looks to be preserved to its original height, lies over these ribs. In this first ‘test trench’ the hull appears even to retain its original curvature. Thus, we are dealing not only with wood that can offer reconstruction on paper, but a ship so well preserved as to present us with the unexpected challenge of raising and preserv­ing it for permanent display.

Still, questions wait to be answered in future seasons. Where did the ship originate? What course had her captain charted before she came to her end in Cyprus waters? Was she perhaps intended to play some part in supplying the armies Alexander was leading across the eastern Mediterranean world? And was it treachery or foul weather that took her with crew and passengers to the bottom of the sea?