The Roman Republic and Empire are renowned for their geographical scope and cultural impact. The city of Rome was founded in 753 BCE, and the Roman Empire lasted until around 500 CE. The Rome Gallery tells this story through artifacts across centuries, from Rome’s founding to its eventual control of Italy as well as North Africa, Spain, Greece, and Asia Minor. The Roman Empire incorporated peoples of various races, language groups, and cultural backgrounds—and blended their customs and traditions

The artifacts throughout the gallery bring visitors face to face with ancient Romans and their gods and goddesses, such as the statues from the sanctuary of Diana at Nemi, near Rome. Images of the Roman Imperial family include Livia (wife of Augustus), Germanicus (son of Tiberius), Agrippina the Younger (mother of Nero), and the emperor Caracalla. Roman domestic life is vividly illustrated through objects from their houses, including dining vessels, household decorations such as painted wall plasters and mosaics, and utilitarian objects like sections of lead pipe that brought them drinking water. A large model of a Roman house similar to those excavated at Pompeii and Herculaneum allows visitors to put these objects in context. Other displays of jewelry, lamps, pottery, bronze objects, and coins round out the picture of Roman life.

Many of the pieces in the Museum’s Mediterranean collection were donated by collectors or purchased in the late 19th and early 20th centuries. Other artifacts were excavated by Penn in the 1930s at the Roman colony of Minturnae (between Rome and Naples) and divided between Italy and the Museum, in the practice of the time. This large marble relief was once part of a commemorative monument for the Roman emperor Domitian, erected in his honor in 95 CE at Puteoli, near Naples. The block embodies both politics and practicality: one side of the relief contains an inscription honoring Domitian, which was (incompletely) chiseled off after his assassination and official disgrace by the Roman Senate in 96 CE. What had been the back of the inscription was then carved into a relief honoring the later emperor Trajan, who ruled the Roman empire at the height of its power. 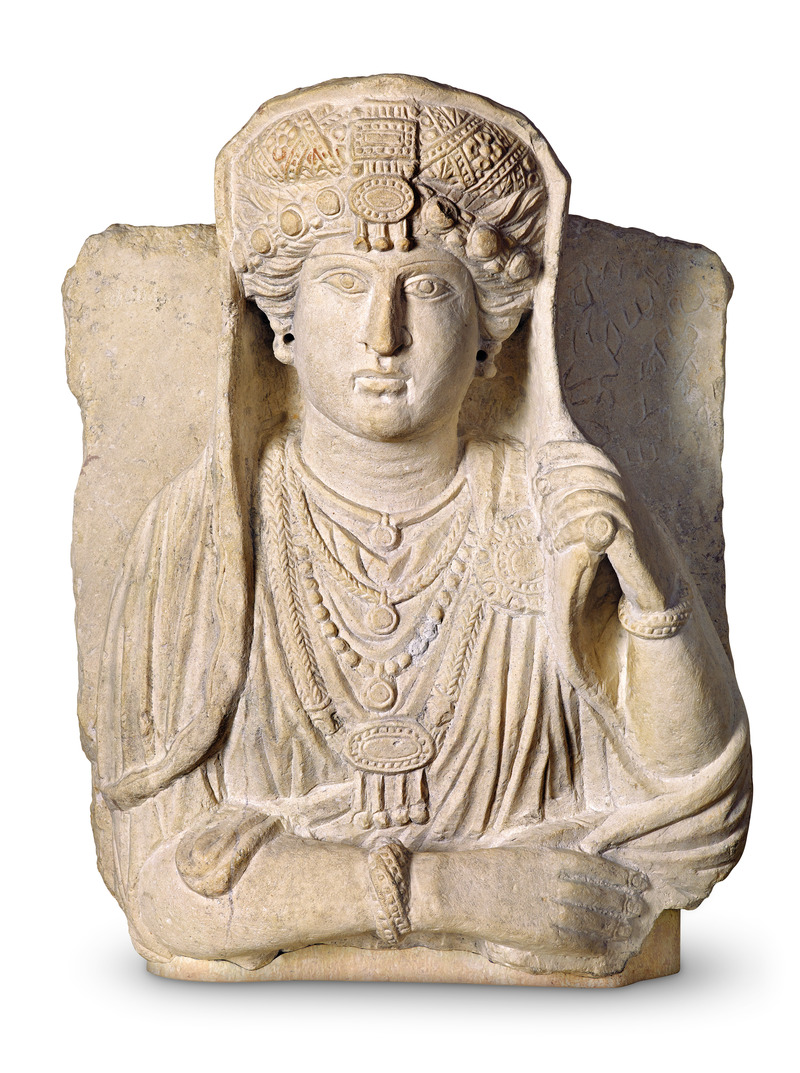 The Roman empire extended more than 2,000 miles in each direction from Rome, encompassing lands as distant as modern-day Syria. This limestone tomb relief is from the ancient city of Palmyra, which was an important intersection of trade routes. Carved in the early 3rd century CE, the relief shows a woman wearing the local style of dress and ornate jewelry; the statue would originally have been painted.

This boat scene mosaic is from a Roman city in modern-day Tunisia, made in the early 3rd century CE. Roman mosaics often incorporated Greek myths—this one shows the legendary Greek hero Theseus escaping King Minos’ labyrinth (home to the minotaur) on Crete.

Explore our galleries from anywhere around the globe. Led by Penn Museum Graduate Guides with PhDs or master’s degrees in archaeology and anthropology, these virtual tours will open up your world with extraordinary artifacts on view and in storage.